Europe is big news for Boks

With the Lions tour now just eight months away, Leicester Tigers head coach Heyneke Meyer believes the Heineken Cup is set to have a big impact in his native South Africa. [more] 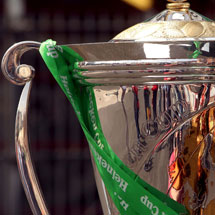 With the Lions tour now just eight months away, Leicester Tigers head coach Heyneke Meyer believes the Heineken Cup is set to have a big impact in his native South Africa.

The Lions face the Springboks in June of next year and Europe’s most-talked about competition offers South Africans the chance to watch potential tourists in action.

Meyer, who had been widely tipped to be the man leading the Boks into battle next summer instead of current South Africa coach Peter de Villiers, is certain that the tournament will receive plenty of publicity back in his homeland.

"In the last two or three years, the Heineken Cup has grown in stature, especially last season," said Meyer, who is entering his first season of European rugby.

"Every game was on national TV in South Africa and there was a huge following. I think what makes it more special now is that a lot of South Africans are starting to play in the Heineken Cup. People do follow the players, they do follow the results and they realise that it’s a great competition."

Heyneke Meyer coached the Bulls to Super 14 success in 2007

Meyer arrived in England with an impressive record having led the Bulls to Super 14 glory in 2007 as they became the first South African entrants to win the southern hemisphere’s premier competition.

After missing out on the top job with the Springboks, Meyer took time out away from the game insisting that he would only return to take up a post that really excited and challenged him.

"One of the reasons I joined Leicester is because I’d love to win the Heineken Cup.

"There’s a lot of pressure and expectation but we’ll just focus on the first one and the rest will take care of itself. It would be unbelievable to win it but it’s important to take it game by game and focus on the little things.

Leicester Tigers were European Champions in 2001 (above) and 2002