Gloucester No8 James Forrester, an outside bet for Lions selection next summer, has been forced to retire at the age of just 27. [more] 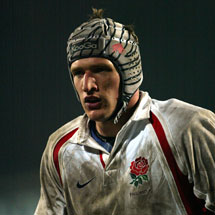 Gloucester No8 James Forrester, an outside bet for Lions selection next summer, has been forced to retire at the age of just 27.

Forrester ruptured the anterior cruciate ligament joint in his knee playing against Bristol in April 2007 and, despite featuring for Gloucester United in a Guinness A League fixture this September, has failed to fully recover from the injury.

Once seen as the most promising forward in English rugby, Forrester was blessed with a stunning turn of speed and superb hands, attributes which are likely to be well sought after on the hard grounds of South Africa in May and June of next year.

"Naturally, I am devastated my career has ended in this way but I have poured every ounce of effort into getting back to fitness for more than 16 months but I now know it’s not going to be enough,” said Forrester, who won two caps for England, the first of which came during the Six Nations clash with Wales in 2005.

"I have put everything I have into getting back to fitness and demanded more of myself in this recovery process than I thought possible but it is simply not going to be and I have been forced to make the hardest decision any player will ever have to make – I had no option.

"I suffered a set-back after the game against Sale and have undergone another operation. That alone means I would be out for another eight months and it is simply not feasible to continue.

"I have had a wonderful career and have a treasure trove of memories. I have been fortunate to have been involved with Gloucester during one of their most high profile and successful periods in their history and I would like to thank everyone involved at the club for making it such a special place – it will always be with me."

Gloucester head coach Dean Ryan paid tribute to the 6ft 5in Oxford-born back rower, admitting that his player had never really had the chance to fulfill his obvious potential.

"The game’s lost an enormous talent, I don’t think we really saw how good he could be,” said Ryan, who leads his Gloucester side into Heineken Cup action against Biarritz at Kingsholm this Saturday.

"When any player’s career is cut short through injury it is a tragic waste but even more so in James’ case because he was such a prodigious talent.

"It is difficult to put into words just how hard he worked to return to full fitness – it was a testament to his desire to get back into the game after such a bad injury. He has played a massive part in Gloucester’s recent history and his place within the club is assured.

"The tragedy is we never saw the best of him – he could do things on the field that defied belief – the game is losing a great talent."

Forrester scored a total of 51 tries in 134 appearances for Gloucester between 2001 and 2007, including three hat-tricks and the decisive score in the European Challenge Cup win over London Irish two years ago.