Springbok fly-half Butch James has highlighted his desire to play against the Lions next summer following his decision to remain in England for a further three years. [more] 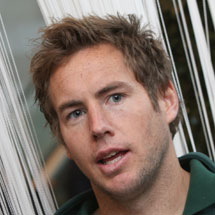 Springbok fly-half Butch James has highlighted his desire to play against the Lions next summer following his decision to remain in England for a further three years.

The World Cup winner, who is currently his country’s first choice No10, has signed a contract extension with Guinness Premiership leaders Bath until the end of the 2011/12 season.

Although James has admitted that his decision to continue playing rugby overseas might bring his international career to a premature end, the 29-year-old has made no secret of his determination to be involved against the Lions in June next year.

"It is always great to be able to play for your country," said James.

"But, I think my days as an international player might be numbered, although I would still really like to make the Lions Tour. If I make the selection for that, we will see from there."

Away from thoughts of James’ international commitments or otherwise, Bath head coach Steve Meehan is delighted to have secured the services of one of the Premiership’s most high-profile players for a further three seasons.

"I think the re-signing of Butch is bigger than the original signing of Butch,” said Meehan, who takes his Bath side to Toulouse to face the reigning French champions in the Heineken Cup this Saturday.

“The impact that he has had on the Guinness Premiership has been outstanding and for Bath to be able to maintain and keep a player of that calibre shows the intent that this club has.”