Blues off to dream start

Former Lions tourist Dai Young couldn't have dreamt of a much better start to the 2008/09 Heineken Cup campaign after his Cardiff Blues side thrashed Calvisano 50-26 in Italy. [more] 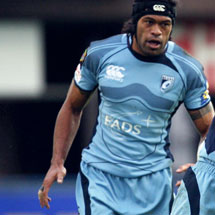 Former Lions tourist Dai Young couldn’t have dreamt of a much better start to the 2008/09 Heineken Cup campaign after his Cardiff Blues side thrashed Calvisano 50-26 in Italy.

Young saw his team score eight tries in total as they produced a superb second-half performance having led just 18-13 at the interval.

"I couldn’t really have asked for more and I would certainly have settled for that before coming out here,” said Young whose Blues squad also face Biarritz and Gloucester in the group stages of Europe’s premier club competition.

"It was a game we had to win and we also targeted a bonus point, so I’m delighted that we’ve done both.”

The Blues reached the quarter-finals of last season’s tournament before losing to runners up Toulose in France and Young is determined for his side to improve on that achievement.

A win over group underdogs Calvisano was therefore a must, although Young insisted that his side were taking nothing for granted ahead of their opening fixture.

"We knew it wasn’t going to be easy. Calvisano were always going to be tough, especially up front, but I was always confident that we had the quality to control the pace of the game and score tries.

"The first half was tight. We wasted a few half-chances early on and lost our way a bit before half-time, trying to play too much rugby in the wrong parts of the field.

"But we recovered and controlled the second half and scored some great tries. I was also pleased we didn’t concede a late try when they finished the game so close to our line.

“This pool is going to be very tough and potentially every point could count, so we didn’t want to give away any soft tries at the end.”

The Blues now turn their attentions to a mouth-watering clash with Gloucester at the Millennium Stadium next Sunday.