Bath keen to bounce back

After the heartbreaking nature of their last-minute defeat in Toulouse on Sunday, Bath Rugby will be looking to return to winning ways when they host Newport Gwent Dragons tomorrow afternoon. [more] 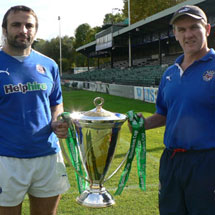 After the heartbreaking nature of their last-minute defeat in Toulouse on Sunday, Bath Rugby will be looking to return to winning ways when they host Newport Gwent Dragons tomorrow afternoon.

The Guinness Premiership leaders lost 18-16 to the French giants, despite outscoring their illustrious opponents by two tries to none.

Now they face the Dragons, who beat Glasgow at Rodney Parade in their opening pool game, knowing they are no longer underdogs but are instead the heavy favourites to record their first win of the competition.

“We went to Toulouse with an attitude whereby we were going to throw everything at them,” said Bath forwards coach Mark Bakewell.

“No one could dispute the intensity that our guys played with last week or the willingness to take Toulouse on. You will never ever hear a harsh word about that side of it. The application and the intent was outstanding, especially against a team like Toulouse.

“We had nothing to lose and we believed we could win and I think Newport Gwent Dragons will come with the same attitude.”

Bakewell and head coach Steve Meehan led Bath to their first trophy since their Heineken Cup triumph of 2008 when they beat Worcester at Kingsholm to claim the European Challenge Cup at the end of last season.

The West Country side, who dominated English rugby for a long period prior to professionalism, are desperate to add to that trophy collection but Bakwell’s men are fully focussed on the Dragons, from whom they expect a tough test at The Rec.

“They will come here with a positive mindset and try and put us off our game in an attempt to play their own game.

“It will be different in the sense that they have different structures to the way they do things – in some areas simpler systems and in other areas more complex than Toulouse, but they will try and apply the way they play. We have to be ready for that.”