Bath Rugby registered their first win of this year's Heineken Cup as they held off a spirited Dragons performance in front of a capacity crowd at The Rec on Sunday afternoon. [more] 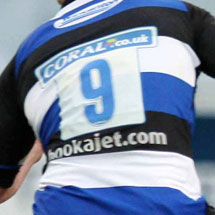 Bath Rugby registered their first win of this year’s Heineken Cup as they held off a spirited Dragons performance in front of a capacity crowd at The Rec on Sunday afternoon.

2005 Lions tourist Matt Stevens started the match for Bath, with 2001 Test Lion Colin Charvis in fine form for the Dragons.

Bath also included Justin Harrison, the second row who helped Australia secure a series victory over the Lions seven years ago, and Butch James, the South African fly-half hoping to help the Springboks achive the same feat next summer.

Replacement wing Andrew Higgins scored the only try of a match which was most notable for the ferocity of the Dragons defence.

Butch James added a conversion and two penalties as the 1998 Heineken Cup champions bounced back from their heart-breaking last-minute defeat in Toulouse last weekend.

The Dragons twice came close to claiming a try of their own, but were forced to spend the majority of the match on the back foot. James Arlidge and Shaun Connor kicked three second-half penalties between them to secure a losing bonus-point for Paul Turner’s side who remain in second place in Pool 3.

The win sees Bath move level with the Dragons, whose superior points difference keeps them ahead of today’s opponents in a group that also features Scottish side Galsgow.

After a disjointed opening in which both sides’ attempts to move the ball wide were halted by handling errors, Joe Maddock appeared to be on his way for the first try of the match with seven minutes on the clock. The former Canterbury Crusader sliced through the Dragons defence wide on the right only for Italian referee Carlo Damasco to bring play back for a forward pass.

Bath did gain the first points of the day six minutes later courtesy of a Butch James penalty. The South African World Cup winner has been heavily criticised for his performances with the boot so far this season but he made no mistake as he put Bath three points ahead from the edge of the Dragons 22 and 15 metres in from the left-hand touchline.

James then attempted to make it 6-0 with the game 18 minutes old but his penalty finished right of the uprights from two metres inside the Dragons half.

Bath continued to dominate possession but the West Country side were unable to turn pressure into points until the 25th minute when James kicked his second successful penalty. The Springbok outside-half, who has now played 18 months of continuous rugby, had little difficulty making it two kicks from three with a straightforward 20-metre effort from just to the right of the posts.

Damasco finally lost patience with the regularity of offences from the Dragons at the breakdown, with ex-Wales skipper Colin Charvis the man to receive the game’s only yellow card 12 minutes before the break. Surprisingly, Charvis’ indiscretion came on a rare Dragons foray into the Bath half and not as the Welsh side were defending their own territory.

A fine break from left wing Matt Banahan almost saw Bath add to their tally with 36 minutes gone but, again, the Dragons defence held firm. After taking play into the opposition 22, Banahan fired a long pass to the supporting Jonny Faamatuaino. The Samoan in turn attempted to feed outside centre Alex Crockett after being hauled down five metres short of the tryline but his pass fell to Crockett’s feet and not into his hands.

The Dragons were first off the mark in the second period as New Zealand-born fly-half Arlidge reduced the gap to just three points at 6-3. Arlidge sent a sweetly-struck penalty straight between the uprights with just over a minute played after Bath had come off their feet at a ruck on their own 10-metre line.

Bath almost responded in perfect fashion just 60 seconds later as Banahan again troubled the Dragons defence. The England Saxons wing, who was previously seen as a second row during his time with London Irish, brushed aside Richard Fussell before chipping ahead on the edge of the 22. Banahan beat Dragons full back Phil Dolman  to the bounce but the ball slipped from his grasp as he seemed set to race over unopposed.

It took a further 21 minutes for the home side to finally get across the Dragons line, with Higgins the man to break the deadlock. Higgins picked up Matt Stevens’ long pass just a couple of metres in from the left touchline before powering his way over as Bath finally gained some reward for their territorial dominance.

James put a second penalty miss behind him as he added the extra two points from a difficult angle to move Steve Meehan’s men 10 points clear at 13-3.

Shortly after replacing Arlidge in the Dragons outside-half position, Connor brought the Welsh region back to within a single score with a well-taken 40-metre penalty. The former Osprey then further tested Bath’s nerves as he struck another three-point effort with just four minutes to play.

The Dragons were unable to gain a further foothold in Bath territory, though, and it was the Guinness Premiership leaders who claimed victory to keep in touch with a Toulouse side who have started the competition with two wins from two games.