Leinster not getting carried away

Michael Cheika is refusing to allow his Leinster players to get carried away with their 41-11 drubbing of double champions London Wasps in the Heineken Cup on Saturday evening. [more] 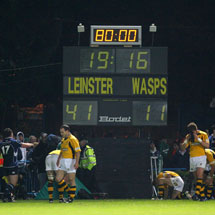 Michael Cheika is refusing to allow his Leinster players to get carried away with their 41-11 drubbing of double champions London Wasps in the Heineken Cup on Saturday evening.

The six-try demolition made it maximum points for the Irish province from their opening two games in Pool 2 but Cheika is determined to take things one step at a time.

“The minute you start trying to do the maths in the Pool at this stage you are in trouble,” said Cheika.

“We are very happy with the game and the way it went. We showed great character and we stood up to London Wasps physically.

“What we need to do now is stay focussed on the games between now and the next round and not get ahead of ourselves. We need to be ready for Castres and be ready to play even better than this.”

Amid the euphoria of an outstanding performance and victory in front of a capacity crowd, Cheika had to deal with two injury worries. Skipper Leo Cullen left the battle after only 15 minutes with a suspected broken collar bone, while two-try hero Brian O’Driscoll wasn’t sent out for the second half after injuring his right knee.

“It doesn’t look too serious,” was Cheika’s verdict on the suspected knee ligament injury suffered by the 2005 Lions skipper.

“He just couldn’t get his knee moving properly during the game. We took the decision to take him off at half-time even though he didn’t want to leave the game.”