With Gerald Davies and Ian McGeechan having now announced their key management team for next summer's Lions tour, we taker a closer look at the men and women travelling to South Africa in 2009. [more] 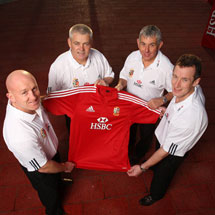 With Gerald Davies and Ian McGeechan having now announced their key management team for next summer’s Lions tour, we taker a closer look at the men and women travelling to South Africa in 2009.

His first tour was to South Africa in 1968, when he played in the third Test and scored three tries in eight matches against provincial opposition. In New Zealand in 1971 he played in all four Tests in the 2-1 series win, scoring twice in the second Test and getting another try in the third Test. He also scored seven tries in six appearances against provinces, including four against Hawkes Bay.

Davies studied at Loughborough University and won three rugby Blues at Cambridge University, playing club rugby for Cardiff and London Welsh. He captained Cardiff for three seasons in the 1970s. He made his international debut on 3 December, 1966 against Australia in Cardiff, and won his 46th and final cap against the same opposition in 1978. He scored a then record 20 tries for his country.

Ian McGeechan was appointed Head Coach for the 2009 British & Irish Lions tour to South Africa on 14 May, 2008 and has since visited the Republic with Tour Manager Gerald Davies on fact-finding missions.

He played for Headingley and made his debut for Scotland in 1972. He won 32 caps, playing at outside-half and centre, and captained Scotland in nine Tests. In 1986 he became assistant Scotland coach and in 1988 was promoted to coach. In 1990, his team won a Grand Slam and Five Nations Championship title. In 1994 he was appointed Northampton Saints’ Director of Rugby and in 1999 as Scottish Director of Rugby.

In 2005 he took over as Director of Rugby at London Wasps – a position he still holds – and in his first season he guided Wasps to the Powergen Anglo Welsh Cup title and followed that up with the Heineken Cup in 2007 and the Guinness Premiership Final title last season.

Warren Gatland was appointed as the 20th Welsh national coach on 9 November, 2007, and in just over four months guided Wales to the 2008 RBS Six Nations title and the nation’s 10th Grand Slam. He first tasted defeat when Wales were beaten in both Tests of their South African tour in June earlier this year.

The former hooker made his All Blacks debut against Western Australia in Perth and played 17 times for New Zealand, without playing in a Test. He captained and made 140 appearances for Waikato, including a 38-10 win over the 1993 British & Irish Lions.

He then joined the coaching staff at London Wasps and took over as director of rugby in 2002. He steered Wasps to the Premiership title in 2003, 2004 and 2005 – conceding only one try in three Twickenham finals. In Europe, his side won the Challenge Cup in 2003 and the Heineken Cup at Twickenham in 2004.

Shaun Edwards, who worked closely with Warren Gatland at London Wasps, linked up with Gatland again when Edwards joined the Welsh Rugby Union as Assistant Coach (Defence) on 14 January, 2008. He works part time with Wales during tournaments and tours up until January 2010 while continuing as London Wasps head coach. Wales conceded just two tries in winning the 2008 RBS Six Nations Championship and Grand Slam.

He signed for Wigan for £35,000 on his 17th birthday and made 467 appearances for the club, scoring 1,140 points. He won the Challenge Cup eight seasons in a row with Wigan and nine times in all. He also won eight Championship titles with Wigan. He played 36 times for Great Britain, scoring 16 tries, and played in the 1992 and 1995 World Cups with England. He also played professionally for Balmain Tigers in Australia, London Broncos and Bradford Bulls.

Recently voted the fourth-best British rugby league player of all-time, he moved to rugby union in 2002 when he became backs coach at Wasps. His winning partnership with Gatland produced six trophies in three seasons, including the European Challenge Cup in 2003 and the Heineken Cup in 2004.

He is currently in his fifth season as Head Coach at Wasps, working under Director of Rugby and British & Irish Lions 2009 Head Coach Ian McGeechan, and has added a second Heineken Cup triumph and last season’s Guinness Premiership Final title to his tally which now includes two Heineken Cup, four English Premiership crowns, one European Challenge Cup and an Anglo-Welsh Powergen Cup triumph.

Robert Howley, a member of Warren Gatland’s 2008 Grand Slam winning coaching team, cut his coaching teeth as Cardiff Blues backs coach and, when he was appointed Wales Assistant Coach (Attack) on 14 January, 2008, he combined the jobs for club and country until joining the national team on a full time basis in July.

When a hand injury forced him to retire while a player with London Wasps he returned to Wales to take up the post at Cardiff Blues in 2005. He has coaching qualifications via both the RFU and WRU systems and worked under Head Coach Dai Young at the Blues for three seasons.

The former scrum half won 59 caps for Wales, scoring 10 tries, and captained his country to 15 wins in 22 matches, including a run of 10 successive victories in 1999 and Wales’ only win against South Africa in 22 Tests between the countries. He led Wales to the quarter-finals of the 1999 World Cup on home soil and was voted Welsh Player of the Year in 1996 and 1997.

He twice toured with the British & Irish Lions. Injury wrecked his dreams on the 1997 tour to South Africa after only five matches, while he played in the first two Tests in Australia in 2001 before injury once again took its toll. He played for Bridgend, Cardiff and London Wasps, helping Wasps to win the Heineken Cup and the Premiership titles. He is one of only eight Welsh players to have won a Heineken Cup winners medal.

The Lions coaching team gathered in Dublin on Wednesday

Craig Anthony White was recruited in May 2008 by the Welsh Rugby Union as conditioning coach to complete the national squad coaching team. He was recently elevated by the WRU to the position of National Squad Performance Manager.

He was previously Head Strength and Conditioning Coach at Leicester Tigers and has worked at the top level with the Irish Rugby Union, London Wasps and the 2005 British & Irish Lions. He worked with Warren Gatland, Shaun Edwards and Rob Howley at Wasps at a time when the club won the European Challenge Cup, Heineken Cup and three Premiership titles. While working at Leicester, the club won the EDF Energy Cup, the Premiership title and reached the Heineken Cup final.

He has an impressive track record in top class soccer with Bolton Wanderers and has studied with experts from many other sports including athletics, power lifting and AFL. He played amateur rugby league for Great Britain before moving into the strength and conditioning side of coaching with Waterloo.

Rhys Long was appointed as Head of Performance Analysis for the Welsh Rugby Union in August, 2007. The former London Wasps’ Technical Analyst joined a three-man analysis team supporting not only the Wales national team but the entire elite performance structure in Wales, from national age grade sides to Sevens and elite referees.

Long, a former Welsh Schools No8 and player at Bridgend before suffering a lower leg injury, graduated in Sports Science at UWIC in 2003 before taking an MSc in Performance Analysis and joining London Wasps in 2005. While at Wasps, Rhys was part of the management team that took the side to the inaugural Anglo-Welsh Powergen Cup final victory and the Heineken Cup final win in 2007.

Dr James Robson initially qualified as a physio from Queen Margaret College in Edinburgh before spending a further six years studying medicine at Dundee University. He is currently Head of Medical Services / National Team Doctor for the Scottish Rugby Union.

His first official post in rugby came in 1991, when he took up the role of Scottish team physio on their tour to Canada. He held that post until 1996. He then graduated to become the Scottish team doctor at the start of season 2002/2003, having filled the same role with Scotland A between 1998-2002 and been the doctor/physio for Scotland 7s from 1996-2001.

He has been the team doctor on the past four British & Irish Lions tours – to New Zealand in 1993, South Africa in 1997, Australia in 2001 and New Zealand four years ago.

Greg Thomas will be following a family tradition by joining a Lions tour to South Africa as his father, Clem Thomas, was a Test player on the 1955 tour. Born in Swansea he played for the All Whites, London Welsh, Welsh Universities and Wales Students before emigrating to Australia, where he played for the Sydney-based club, Randwick.

In 1997 he was appointed the Senior Media Advisor to the Sydney Organising Committee for the Olympic Games. During the Games he was the Venue Media Manager at the Aquatics Centre. After the Olympics he became Deputy Managing Director of the Australian Tourism Export Council before taking up the post of Head of Communications at the IRB in 2004.

He has worked in different capacities at four Rugby World Cups, latterly as head of Communications and Media, and is shortly to return to Australia to set up a Sports Media Consultancy.

Louise Ramsay came into rugby after a decade of success working for the British Olympic Association. As Director of Games Services she had logistic responsibility for British teams at three summer and winter Olympics and was awarded an MBE in 2001 in recognition of her work with the BOA.

She joined the England rugby team as team manager in 2001 and was a key part of Sir Clive Woodward’s management team as they helped deliver the Grand Slam and Rugby World Cup in 2003. She continued in that post until 2004 when she accepted the role of team manager for the 2005 British & Irish Lions tour party.

In 2007 she was appointed team Operations Manager for the 2009 tour to South Africa.

Christine Connolly is the Communications Manager for both the British & Irish Lions and the Six Nations companies, a post she has held since January, 2007. She has worked for both companies at their Dublin headquarters since 2000.

In 2001, she helped to co-ordinate the Lions commercial programme for their tour to Australia in conjunction with Octagon Marketing and was heavily involved in the management of the travel and hospitality for the VIPs. Her Lions experience also includes liaising with management on the return of injured players and making preparations for their replacements to travel to join the tour.

She was responsible for organising the pre and post-match functions at the Millennium Stadium in 2005 around the Lions’ game against Argentina, that included an 800-strong "Farewell Dinner" for the tourists.

Louisa Cheetham will be heading to her third Lions tour as a key member of the Media Management team. With more than 13 years experience working in sports marketing and media, she has developed strong links with rugby.

She was one of the Octagon Consultancy team that so successfully activated Zurich’s sponsorship of the English Premiership, the 2001 and 2005 Lions tours, the Heineken Cup and England Rugby.
On the 2001 Lions tour to Australia she was the Commercial Media Manager, while four years later in New Zealand she developed and implemented the communications strategy and programme for the tourists –  from 12 months out and through the tour.