Fresh from announcing his coaching team for the 2009 Lions tour to South Africa, head coach Ian McGeechan has reiterated the size of the challenge ahead. [more] 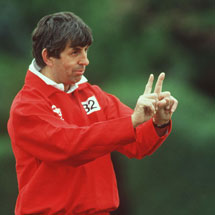 Fresh from announcing his coaching team for the 2009 Lions tour to South Africa, head coach Ian McGeechan has reiterated the size of the challenge ahead.

The Lions travel to the home of the current World Cup holders looking for their first series victory since 1997 and McGeechan knows that they will face a far from easy task.

”There’s no doubt that the challenge this time is going to be the biggest of all,” said McGeechan, who is about to take part in his seventh Lions tour as either a player or coach.

”They’re in good shape. They’re World Champions, again, and they’ve got some really talented players so I think it is going to be a huge, huge challenge. I also think it is important that we try and get together really quickly simply because of the quality that South Africa have at the moment.”

Now, McGeechan insists that excitement surrounding the tour is beginning to build day-by-day.

“It’s quite incredible! When I saw the Lions badge up there again, the hairs on the back of my neck stood up.

“It’s a huge responsibility, and I realise that. You are carrying the hopes of four countries and everybody associated with those four countries.

“I think the Lions is so unique. It’s given me fantastic experiences, as a person as well as a player and a coach.

"I’m just excited about having the opportunity to be involved again and trying to make it as special a tour as possible for those people who will be involved in 2009.”