Steve Borthwick has reiterated his Lions captaincy credentials after being named England skipper for the autumn internationals. [more] 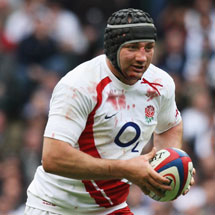 Steve Borthwick has reiterated his Lions captaincy credentials after being named England skipper for the autumn internationals.

The Saracens second row led England on their summer tour to New Zealand and will continue in the role for the games against the Pacific Islanders, Australia, South Africa and the All Blacks next month.

“Steve is a good leader and always prepares thoroughly for all his matches at club and international level and I’m looking forward to working with him,” said England manager and former Lions captain Martin Johnson.

"I won’t be giving Steve a specific amount of time in the job. I just want to support him as much as possible and I know he will enjoy all the responsibility and work that comes with being captain of England."

Borthwick, who featured in every minute of his country’s 2008 Six Nations campaign, has yet to tour with the Lions after missing out in 2005 but now joins Brian O’Driscoll, Mike Blair and Ryan Jones as one of the leading contenders for to lead Ian McGeechan’s men in South Africa next summer.

“My three games as England captain have been away from home so to lead the team out at Twickenham will be a special moment,” said Borthwick, who first skippered England in Italy earlier this year.

“But my overriding aim is to help England get off to a winning start in the Investec Challenge series.

"I really enjoyed the week we had together in August and it showed what a good squad we have and that will hold us in good stead as we prepare for four very challenging games starting with the very tough Pacific Islanders on November 8.

“The squad and the coaching team is excellent and I’m really looking forward to our preparation and the games over the next four weeks."