Lions lock Danny Grewcock has played in some big games is his 12-year professional career, but the 35-year-old ranks the first Test victory over Australia seven years ago among the very best. [more] 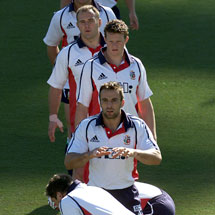 Lions lock Danny Grewcock has played in some big games is his 12-year professional career, but the 35-year-old ranks the first Test victory over Australia seven years ago among the very best.

The Lions did the Home Nations proud on June 30, 2001 as they crushed the Wallabies 29-13 in Brisbane, with Grewcock in commanding form in his first Test as a Lion.

The atmosphere at the Woolongabba Cricket Ground and the comprehensive nature of the result makes that win particularly memorable for a player who could make it a hat-trick of Lions tours with a place in next summer’s squad to face South Africa.

"The first Test was one of the biggest games and best feelings," said Grewcock, who appeared in six of the 10 fixtures in Australia and a further four in New Zealand in 2005.

"It wasn’t the most magnificent stadium but the crowd made it like a home game. For me, that was certainly one of my career highlights."

Grewcock returns to club duty this Friday after two months on the sidelines as a result of a bicep injury but the crowd at the Arms Park for Bath’s clash with Cardiff Blues is unlikely to rival the enthusiasm of the 37,000 in attendance in Brisbane.

"That was probably the best-supported game I’ve been too, and that was an away game. It felt like we were playing in a home game.

"The atmosphere was just unbelievable, and not just in the stadium. It was as we left the hotel and the drive to the stadium. I think it suddenly dawned on people what was going to happen that day. I think it was that little edge that really drove us on and pushed the guys to play that extra special game, to play perhaps better than we expected and better than a lot of other people expected."

Danny Grewcock was a stand-out Lions performer seven years ago

For Grewcock, like the vast majority of those who have preceded him and will follow him into Lions colours, representing the four Home Unions on the field of play was the ultimate honour. All that was missing from his Lions experience in 2001 was a series victory; something that also evaded him four years later.

"For anyone to be selected on a Lions tour is a very, very special day. To get in that squad feels fantastic but the important thing is that you want to go out there, you want to earn your jersey and play the game.

"Once you’ve played on tour, it’s then a question of battling for a Test place. It’s great being selected for the Lions but, deep down, you know that the big games are still to come.

"The expectations were quite low on that first Test from the press perception of us. We coped a lot of stick from the Australians so it was nice to come away with a good result.

"We showed we were competitive but we ended up losing the next two Tests. We weren’t quite good enough but it was just unfortunate that, in the second game, we played well in the first half but then in the second half the Australians really showed their class."