A different type of ref

Refereeing decisions are often among the most controversial elements of post-match discussions but at least accusations of bias are far less common now that the modern game predominantly features neutral match officials. [more] 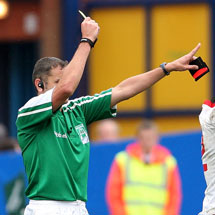 Refereeing decisions are often among the most controversial elements of post-match discussions but at least accusations of bias are far less common now that the modern game predominantly features neutral match officials.

It wasn’t always that way, however, as former Lions flanker John Taylor can testify.

The Wales and London Welsh star was part of the historic Lions tour to New Zealand in 1971 – a tour on which he would come face to face with a referee who would provide him with a story which he enjoys telling to this day.

"The worst of the lot when it came to referees were Australians," says Taylor, who played in all four Tests during the Lions’ only series victory to date against the All Blacks.

"We went down to Australia with Wales in 1969 and we played a Test at the Sydney Cricket Ground after we’d played New Zealand. We were leading about 15-3 at half-time and, in those days, Test matches were pretty low scoring. The game was won, but not according to the referee.

"In the second half, he threw the book at us. He even made Maurice Richards swear at the end of the game. Maurice was a lay preacher and he never swore. The referee penalised him by ordering a penalty kick from half way, and if they kicked that they’d have won.

"Afterwards, I got the referee in the bar and I said, ‘What was that all about?’ He said, ‘Listen mate, down here, you’ve got four codes. You’ve got soccer, you’ve got Australian Rules and you’ve got league, and rugby’s a poor fourth. Our blokes need all the help they can get and I’m the man to give it to them!’

"Two years later, I got off the plane with the Lions and there was this bloke on the tarmac with his arm out stretched. He said, ‘John mate, remember me? Craig Ferguson. I’m still a cheating bastard and I’m refereeing on Saturday!’"