With the 2009 Lions tour now well and truly on the horizon, the selection of the Home Union squads for this weekend's first round of autumn internationals carries even greater significance. [more] 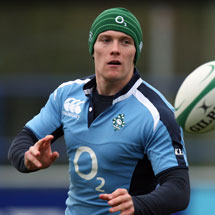 With the 2009 Lions tour now well and truly on the horizon, the selection of the Home Union squads for this weekend’s first round of autumn internationals carries even greater significance.

Although head coach Ian McGeechan has stated that he will be keeping a close eye on domestic as well as international rugby throughout the season, November’s fixtures against the Southern Hemisphere giants provide the perfect opportunity to stake an early claim for Lions inclusion.

For at least seven of those players named in their country’s starting XV for this weekend’s games, the Lions tour to South Africa would have seemed an incredibly long way off just weeks ago. Now, though, Keith Earls, Leigh Halfpenny, Andy Powell, Delon Armitage, Ugo Monye, Riki Flutey and Nick Kennedy are all one step closer to the ultimate honour.

Munster full back Keith Earls has been rewarded for a fine start to the season with a first appearance in Ireland colours against Canada at Thomond Park, while Leigh Halfpenny and Andy Powell will both make their Wales debuts in the clash with South Africa in Cardiff a few hours earlier.

Former Lions captain Martin Johnson has named Armitage, Monye, Flutey and Kennedy at full back, wing, inside centre and lock respectively for the match against the Pacific Islanders at Twickenham on Saturday as England warm up for successive fixtures against Australia, South Africa and New Zealand.

Scotland are the only one of the four countries that contribute to a Lions squad not to include an uncapped player in their matchday 22, but their mouth-watering encounter with the All Blacks will see Glasgow wing Thom Evans make just his second appearance at senior international level.