Boks and Lions on the agenda 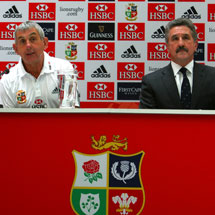 Lions manager Davies and head coach McGeechan will be keeping a close eye on the World Champions ahead of the mouth-watering 2009 tour to the Republic, during which the Lions will face the Boks in Durban, Pretoria and Johannesburg.

The two former Lions stars will also be assessing the form of those players looking to follow in their footsteps by pulling on the famous red jersey, although Davies has explained that their brief will not be to focus too heavily on individual players and that, ultimately, the final decision will fall to McGeechan and his coaching team.

"From my point of view, I’ll be looking at the general standard of play of both sides on Saturday," said Davies, who was part of the historic Test-winning Lions side in New Zealand 37 years ago.

"I’ll want to see how Wales match up to the Springboks physically and to see the patterns of play in general. I won’t be going to Cardiff specifically to watch just one or two players.

"This is just the start of the season and, as the season progresses, there will be plenty of opportunities in the Magners League, the Guinness Premiership, the Heineken and European Challenge Cups, the EDF Energy Cup and the Six Nations to pick out in-form players. At the moment, Ian and I are just looking for an overview."

Both coach and manager travelled to South Africa on a fact-finding mission during the summer and Davies is hoping that the Springboks’ autumn Tests against Wales, Scotland and England will provide even more useful information on the challenge facing the 2009 Lions.

"We’ll see all the Springbok games and what we’d like to do, between Ian and myself, is see all the Home Nations play," added Davies.

"South Africa are a formidable side and I’m sure they will have improved on their performances in the Tri Nations. Having talked to their coaches, they were disappointed with some of their performances during that competition but they finished on a real high with a 50-point win over Australia.

The Springboks finished the 2008 Tri Nations on a high

Although next summer’s tour has already been much-talked about, Davies has a simple message for potential Lions candidates: play your own game and let everything else take care of itself.

"The message is just to concentrate on playing well and playing for the team. If players start thinking too far ahead, that can take them away from playing their own game.

"We want players to play their natural game, but we know that they all want to be on the Lions tour next May and June and that will be at the back of their minds. The presence of a Lions tour should be something that players should be comfortable with. It’s not an inhibiting factor; it should be an inspiring one."

Davies acknowledges that there is still plenty of rugby to be played before the Lions line up for their first tour match against a Highveld XV on May 30 and he insists that McGeechan and his fellow coaches will be selecting purely on merit and not on past performances or reputations.

"We are definitely working with a clean sheet of paper. What we need to bear in mind is that there is a long season ahead. A lot of players will be making their names during that period.

"I’d like to think that, come April, players will have proved themselves, not only in terms of their skills and playing capabilities but also in terms of their strong characters, competitive instincts and the will to win. All those elements will come into play.

"The quality of players are here, without question. When we looked around last year, there was more than sufficient evidence to show that there are plenty of good players around. There are obviously certain players who impressed last year from all four countries and we will be thinking about them, but that’s not to say that any name has been pencilled in so far.

"The exciting thing about that is that the opportunities are there for players to make an impression this year. We mustn’t be prejudice going into the season, and we won’t be."