Gavin Henson has ruled himself out of Wales' clash with South Africa this Saturday. [more] 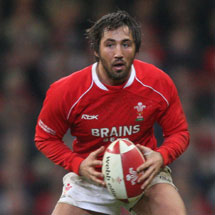 Gavin Henson has ruled himself out of Wales’ clash with South Africa this Saturday.

The Ospreys centre had spoken of his delight at being selected for the match against the World Champions but has since declared himself unfit for the Millennium Stadium encounter.

"Gavin told us that he’s mentally and physically not ready,” said Rob Howley, backs coach for both Wales and the 2009 Lions.

Henson had played for his region last Sunday in an attempt to build his match fitness but has since aggravated an Achilles tendon injury. The 26-year-old has completed just three full matches in seven months and had been hoping to prove his worth in his first international since last season’s Six Nations.

"We hope the situation with Gavin will get better, said Howley.

"He aggravated the injury on Sunday, six days ahead of the international. A six-day turnaround is a high demand on players and Gavin Henson has fallen foul of that.

"Gavin had taken part in training sessions on Tuesday and Thursday, but has also been rested for some of our sessions this week.

2005 Lions tourist Tom Shanklin replaces Henson in the centre, with Jamie Roberts moving from the No13 to No12 shirt to accommodate his Cardiff Blues team-mate.

"We have had ample opportunity to run the Shanklin and Roberts combination and knew this configuration would be our other option, but thought it was important that Gavin made the decision on his capability to play himself,” added Howley.