Saturday's autumn internationals may have brought two wins and two loses for the Home Nations sides but they also prompted widespread debate as to who may have caught the eye of the Lions coaches ahead of next summer's tour to South Africa. [more] 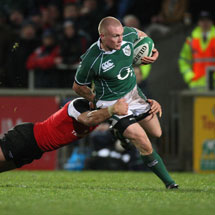 Saturday’s autumn internationals may have brought two wins and two loses for the Home Nations sides but they also prompted widespread debate as to who may have caught the eye of the Lions coaches ahead of next summer’s tour to South Africa.

Tour manager Gerald Davies and head coach Ian McGeechan were in Cardiff on Saturday to watch Wales take on the Springboks but they will have also had an eye of the performances of England, Ireland and Scotland.

Former Lions skipper Martin Johnson saw his England side record a 39-13 win over the Pacific Islanders in his first international in charge, while Declan Kidney celebrated his opening match as Ireland coach with a comprehensive victory over Canada at Thomond Park.

It wasn’t such an impressive start to the autumn series for Scotland, however, with Frank Hadden’s men joining Wales in experiencing defeat as they lost 32-6 to a much-changed New Zealand side.

Davies has made it clear that final selection for the 2009 Lions tour will come down to McGeechan and his coaches alone and that his own primary role at the Millennium Stadium was to keep an eye on the general performance of the World Champions.

The Wales legend was also at pains to remind the media that much can change between now and May next year but that won’t stop the newspapers from giving their opinions on who may have caught McGeechan’s eye.

Plenty of players stood out for various reasons but three of the major headline grabbers from Saturday’s games in Cardiff, Edinburgh, London and Limerick were international debutants:

The London Irish full back made his senior debut in the win over the Pacific Islanders and the 24-year-old suggested he may have what it takes to become an England regular.

"Armitage has something about him, and in between catching his first high ball yesterday with real confidence, and then collecting the man of the match award after a thoroughly impressive debut, he showed composure, gas and a heady optimism.
"Armitage played a part in three of the five tries, and he was quite wonderfully exuberant throughout.
"Afterwards, comparisons with the Cheshire cat were inescapable. ‘I have just got this beam on my face," he said superfluously. I can’t believe really that this is all happening to me.’"

"Delon Armitage showed that he has the ability to be a fantastic international rugby player, but we have known that at London Irish for some time.

"Armitage grew up in France and he runs with skill and flair, a touch of the Serge Blancos, if you like. He has obviously got a long way to go before he can be compared to the Gallic genius, but he has some of that same mercurial feel for rugby.

"He has a lot to learn, but his decision-making against the Pacific Islands was outstanding."

Michael Aylwin – The Guardian / The Observer:

"Delon Armitage, the most accidental of the new caps, having not even made the second-string squad initially, looked more than happy on the big stage. He had been called up as a replacement for the injured Mathew Tait and then thrust into the starting side when Nick Abendanon pulled out.

"And he was almost faultless, bar being bounced off by his London Irish team-mate Sailosi Tagicakibau in painful fashion right at the end. But his case as the game’s outstanding player had long been rested by then."

"Delon Armitage, the Trinidad-born full-back plucked from the lower ranks to fill a gap for England, emerged as the star of Martin Johnson’s first game as manager of the national team.

"And the 24-year-old from London Irish was quick to share the credit for his stunning debut in the victory over the Pacific Islanders with one of Johnson’s fellow World Cup heroes, former England star Jason Robinson.

"Man-of-the-match Armitage revealed that Robinson had sent him a text message wishing him luck before he ran out to give what Johnson described as ‘the best debut’ he had ever seen."

Munsterman Earls, in his first season as a frontline provincial player, caught the eye with Ireland’s opening try just two minutes into his international debut.

"The fairy-story element of Keith Earls’ season continued with him scoring his first international try with his first touch, at a ground only a couple of minutes from where he grew up."

"The new stadium is a marvellous arena and so impressive that Elton John is playing here next year, but not at prop. Perhaps the music legend can pop into Keith Earls’ house for a cup of tea before the concert.

"The new Ireland full-back lives 500 yards from the ground and started his rugby career with Thomond Park rugby club’s under-nines.

"On his Ireland debut yesterday Earls made the dream start cutting a nice line off Luke Fitzgerald and bursting through two Canada tackles for Ireland’s first try in the third minute."

Brendan Fanning – The Observer / Guardian and the Sunday Independent:

"Most of the local focus was on full-back Keith Earls, making his international debut in the neighbouring parish to where he grew up. There was 2:27 on the stadium clock when he broke the tackle of Mike Burak to crash over.

"Currently, there is not a lot Earls is doing wrong, and you hope that when inevitably an awful game arrives for him that he handles it as calmly as he is dealing with the good stuff. He really looks like a player whose instinct is his most potent weapon."

The Cardiff Blues back row player started at No8 for Wales on Saturday, forcing 2005 Lion Ryan Jones to move to the blindside flank, and the 27-year-old produced the kind of performance that fully validated Warren Gatland’s decision to hand him his international bow.

Andy Powell impressed on his debut for Wales on Saturday afternoon

"Andy Powell could play No 8 for the Lions? Such a thought was unthinkable only a month ago, yet in the brutal, ever-changing ways of professional rugby the prospect of this unsung forward arriving in South Africa next June took some powerful and speedy step forwards on Saturday.

"For Powell to make the plane to South Africa he needs another six months of consistent rugby, something his injury-stalled career has failed to produce on a rocky journey that has taken in Newport, Beziers, Leicester, Llanelli and now Cardiff Blues.

"His performance, especially in the first half when he fired up the Welsh pack by rampaging example, was outstanding on his debut."

Eddie Butler – The Guardian / The Observer:

"Andy Powell (was) a revelation, not so much with his running, but the deftness of his debutant feet in tight situations.

"One of his runs began with a spin, developed into a burst through the two Springbok second rows and ended with an off-load to the Joneses, Alun Wyn and Ryan."

"At the heart of it all were the two debutants – Andy Powell and Leigh Halfpenny.

"No8 Powell showed he can perform at this level and is another weapon in the coach’s armoury.

"Wales, having had no ball and no control, finally got a foothold in the game thanks to two breaks by Powell."