Henson to see a specialist

Gavin Henson will see a specialist this week in a bid to cure the Achilles problem that kept him out of Wales' defeat to South Africa last Saturday. [more] 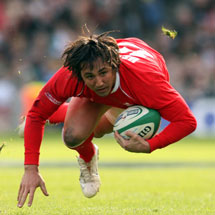 Gavin Henson will see a specialist this week in a bid to cure the Achilles problem that kept him out of Wales’ defeat to South Africa last Saturday.

The 2005 Lion had been named in Warren Gatland’s starting line up for the Millennium Stadium encounter with the world champions but withdrew from the squad after declaring himself unfit.

"Gavin is going to see a specialist this week and just try and get to the root of the problem with that Achilles," Gatland told the Scrum V television programme.

"I think the thing with Gavin is that he’s got to feel confident – he hasn’t played a lot of rugby – he takes the field being 100-per-cent fit.

"When he’s like that we’re going to get great performances out of him.”

Henson has played just three games in seven months after suffering an ankle injury in April this year and Gatland gave no indication of exactly when the 26-year-old will return to action.

"It’s pretty painful for him. He played last Sunday, he didn’t train on Monday – he didn’t really train all week.

"We were prepared to give him all week (to prove his fitness) and Gav made the call on Friday: ‘Look,’ he said, ‘it’s too sore, it’s not right,’ so I said, ‘no problems’.

"He’s been fantastic in our environment and we just hope he gets fit so he becomes available again."