New Ireland coach Declan Kidney has called up 11 players to his squad for Saturday's clash with the All Blacks at Croke Park. [more] 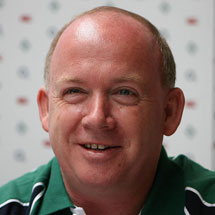 New Ireland coach Declan Kidney has called up 11 players to his squad for Saturday’s clash with the All Blacks at Croke Park.

Kidney’s first game in charge of the national side produced an impressive 55-0 win over Canada in awful conditions and the former Munster coach was more than happy with the effect the performance has had on competition for places.

"In some ways it makes it slightly more difficult, but difficult in a good way because you will have competition for places and that can allow you to prepare better for the following Saturday.

"We’ll just review the video and see what the mix is going forward, but at least the size of the panel now is getting bigger.

"When you have that competition for places it’s always good for players."