Lions skipper Brian O'Driscoll will captain Ireland for the 50th time when they entertain New Zealand at Croke Park on Saturday. [more] 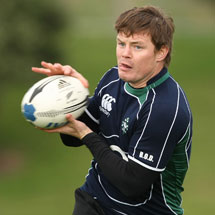 Lions skipper Brian O’Driscoll will captain Ireland for the 50th time when they entertain New Zealand at Croke Park on Saturday.

The Leinster star partners clubmate Luke Fitzgerald in the centre in a side that features six changes from the XV that thrashed Canada 55-0 last weekend.

The major talking point is the inclusion of Munster scrum-half Tomas O’Leary, who replaces Eoin Reddan of Wasps in the No9 shirt. O’Leary will be making his first start for his country having only previously appeared as a replacement against Argentina in the spring of 2007. The 25-year-old has upstaged Peter Stringer for his province this season, after originally being given the chance to impress for Munster under current Ireland coach Declan Kidney.

Full back Keith Earls, a try scorer on his debut against the Cannucks drops to the bench in place of the experienced Girvan Dempsey in the only other alteration to the backline.

The remaining four changes come in the pack, where Rory Best and John Hayes are promoted to the front row and Alan Quinlan and David Wallace step into the back row. All four players appeared as replacements last Saturday, with Quinlan and Wallace scoring late tries at Thomond Park.

Jerry Flannery, Tony Buckley, Stephen Ferris and Shane Jennings all drop to the bench alongside Earls and Reddan.

Ireland are looking for the first-ever victory over the All Blacks in what will be their 22nd time of trying.

"We have selected a team with a skill set that gives us the best possible chance on Saturday,” said Kidney, who takes charge of Ireland in an international for just the second time.

"The changes weren’t easy because the boys did well against Canada at the weekend.

"Alan Quinlan and David Wallace have a wealth of experience at international and provincial level. Girvan has been playing very well and we saw him as the best option at full-back."