Four potential Lions tourists will team up with their South African opponents when the Barbarians take on Australia at Wembley on Wednesday, December 3. [more] 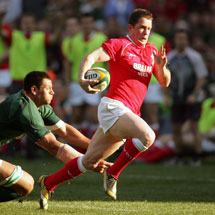 Four potential Lions tourists will team up with their South African opponents when the Barbarians take on Australia at Wembley on Wednesday, December 3.

The match follows the conclusion of the world champions’ UK tour, during which time they will have played Tests against Wales, Scotland and England, and gives the British and Irish public another chance to see South Africa’s best players in action in the lead up to the 2009 series.

Richie McCaw, George Gregan and Jerry Collins have also been named in a Babaas squad that will take the unusual step of wearing the socks of the current Cornwall side in recognition of the county’s outstanding contribution to rugby during the 1908 Olympics.

"Assembling such a star-studded squad from several countries would not have been possible without the approval and co-operation of national unions and individual provinces and clubs and we are grateful for the support we continue to receive,” said Barbarian committeeman and former Lion Mike Burton.

"Many people in many different capacities recognise the role of the Barbarians in such high-profile fixtures and their encouragement is a huge fillip to all of us who are involved. It promises to be a great occasion in every respect."