Fourie du Preez will miss South Africa's clash with Scotland after picking up a knock in training. [more] 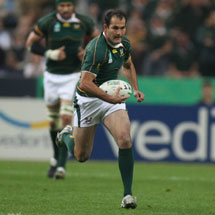 Fourie du Preez will miss South Africa’s clash with Scotland after picking up a knock in training.

Du Preez was absent for much of the domestic season and the away leg of the 2008 Tri Nations before returning to Springbok colours for the final four matches prior to the world champions’ tour of the UK.

The World Cup winning scrum-half started last Saturday’s victory over Wales in Cardiff and had again been named in the side for the match at Murrayfield.

Du Preez was one of the stars of the 2007 World Cup and is expected to be a key player for the Boks when the Lions come calling next summer.

The 26-year-old has been replaced in the starting XV by Ricky Januarie of Western Province and the Stormers, a player with considerable experience at Test level.

Januarie claimed the No9 shirt in du Preez’s absence earlier this year and has already appeared in 10 internationals so far in 2008. He scored a stunning solo try in the historic late win over the All Blacks in Dunedin and has been in impressive form at both Currie Cup and Super 14 level.

Now capped 32 times by the Boks, Januarie started the second of the summer Tests against Wales and the one-off encounters with Italy and Argentina, as well as all three fixtures on the away leg of the 2008 Tri Nations. He has since come on as a replacement in each of the Tri Nations home matches and last weekend’s win over Wales.

Head coach Peter de Villiers has now opted for a five/two spilt on the bench, with back row forward Danie Rossouw taking Januarie’s place among the replacements.