From Pimlico to Port Elizabeth

It is not often that you get two Rugby World Cup winners from two different nations in one room, let alone in a class room in a South West London school. [more] 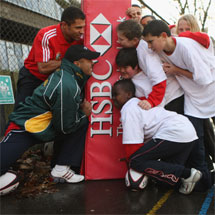 It is not often that you get two Rugby World Cup winners from two different nations in one room, let alone in a class room in a South West London school.

But Monday was no ordinary schoolday for the children at Pimlico Academy, who were treated to a very special coaching session with two of the world’s greatest rugby players.

HSBC ambassador Jason Robinson dropped in to the London school with his old South African rival Bryan Habana to launch HSBC’s IRB SOS Kit Aid scheme, which will bring together schools from the UK & Ireland and South Africa.

As principal partner and shirt sponsor of the Lions tour to South Africa next summer, HSBC has launched the world’s biggest schools’ rugby programme – the HSBC Rugby Festivals. Over the coming months, 60,000 children from across all four Home Unions will be involved with the programme, as well as 3,000 coaches and teachers.

As part of the scheme, 40 schools from the four Home Nations are being twinned with 40 schools in South Africa via the SOS Kit Aid scheme. Rugby kit and balls will be collected from the schools in the UK & Ireland and sent over to South Africa to be distributed to emerging and financially disadvantaged rugby schools across the country.

Speaking at today’s launch at Pimlico Academy, which is the first school to be twinned – with Hillcrest Primary School in Port Elizabeth – Habana said, "I visited Hillcrest Primary School earlier this year and was overwhelmed by the enthusiasm from the children. The school has very basic facilities and yet they are desperate to play rugby. Rugby is already proving to have a positive impact on the lives of this children and this will be further helped through the support of the children from Pimlico.

"South Africa is a proud rugby nation, but there are still plenty of areas where rugby needs to be nurtured and used as a positive change agent in the lives of the youth. The kit being donated through HSBC’s scheme will be a real benefit to the many children who do not currently have the necessary resources."

Five-times capped British & Irish Lion Robinson is heading up the HSBC Rugby Festivals and believes the kit scheme is a fantastic way of bringing together two very different cultures.

"Through the HSBC Rugby Festivals, we are working with emerging rugby schools across the four Home Unions which is a great way of getting new youngsters to play rugby," said Robinson.

Habana, who was the IRB Player of the Year in 2007, has personally nominated Hillcrest Primary School in Port Elizabeth as the first school to be linked with one of HSBC’s schools which was chosen by the Rugby Football Union. Habana is committed to using sport and education to develop future role models in South Africa, and to this end has recently launched the Bryan Habana Foundation in his home country.

Both Habana and Robinson kick started the kit collection scheme by donating some of their own, old rugby kit to the school.

Over the coming months Pimlico Academy will act as a ‘hub’ school for kit collection so local schools, businesses and residents can donate their old rugby kit to the school to be delivered to Port Elizabeth.

Jerry Collins, principal at Pimlico Academy explained what the scheme will mean to the children at the school.

"We would like to thank Jason Robinson and Bryan Habana for coming down to the Academy today and spending time with our students. Both are legends of the game and are a great example to our students of what can be achieved through dedication and hard work.

Mrs. Anne Campher, Principal at Hillcrest Academy said, "We are honoured to be associated with HSBC as well as Pimlico Academy. Our school is situated in one of the poorest areas in the Northern Areas of Port Elizabeth, South Africa and unfortunately we do not have the facilities to practice rugby as our patch of ground is covered in stones, thorns and bottles.

"However this has not deterred us as we still practice with our learners, from under nine right through to under 13. The boys give their all and we can boast to always have learners in our representative team, PE North. Nothing gets us down. The love of rugby outweighs all the negative aspects. I would like to thank everyone for showing an interest in our school."