Ian Evans' chances of becoming a Lion in 2009 have been shattered after the Wales second row was ruled out for the rest of the season. [more] 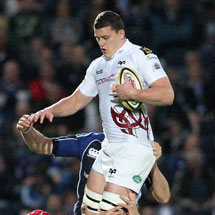 Ian Evans’ chances of becoming a Lion in 2009 have been shattered after the Wales second row was ruled out for the rest of the season.

The 24-year-old Osprey suffered knee ligament damage in the build up to New Zealand’s first try during Saturday’s clash in Cardiff and will be out of action for between six and nine months.

The most-optimistic return date of late May 2009 would leave Evans with only a matter of days before the Lions leave for South Africa.

"There is cruciate damage and we are looking at an operation in the next couple of weeks, and then between six and nine months (out) after that," said Wales team manager Alan Phillips.

"It is quite a blow for us. He was starting to play well, so it is very disappointing for him."

"Ian will be in recovery for a period of six to nine months once he has had his operation," confirmed Wales physio Mark Davies.

"The injury he has is quite common and has good recovery rates, but unfortunately there is no quick way back and Ian will not be back in action this season."

Evans currently has 16 international caps to his name and had started against the Springboks and the All Blacks in the ongoing autumn series.

The latest setback is the second time Evans has faced a substantial spell on the sidelines following a 10-month absence with a shoulder injury that began in December 2006.