David Callam's outside chance of touring with the Lions to South Africa have been dashed with the news he will miss the remainder of the season. [more] 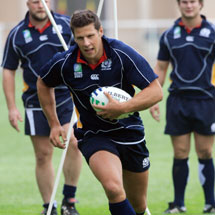 David Callam’s outside chance of touring with the Lions to South Africa have been dashed with the news he will miss the remainder of the season.

Edinburgh and Scotland back row forward David Callam has undergone career-saving surgery to remove a cyst from his hip.

The 25-year-old explained that he developed the rare condition in the past two years and that, upon discovery, swift surgical action was required to avoid long-term repercussions.

He said: "I underwent a routine scan on an injury and discovered a bone cyst in my hip; we were very lucky that we found it.

"It is a rare injury to find in a young sportsman – they are not very common.

"I had an MRI scan two years ago and there was nothing there, but for whatever reason it had developed over that period of time.

"I then underwent a biopsy to ascertain what the cyst was and that was why there was almost a two-month wait to determine the next step forward.

"Initially I was devastated, but fortunately we found out when we did because it could have had serious repercussions on my rugby career."

"Now after undergoing the operation I will hopefully be back playing again next season.

"I’ve got eight weeks on crutches. Hopefully after four months I should be able to start training again and then it will be a case of building myself up from there."