Martin Johnson insists Danny Cipriani is still a key member of the England squad, despite his relegation to the bench this weekend, [more] 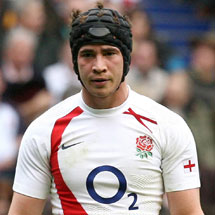 Martin Johnson insists Danny Cipriani is still a key member of the England squad, despite his relegation to the bench this weekend,

Cipriani will start the match of the sidelines, with Leicester Tigers’ Toby Flood taking his place in the starting XV.

And Johnson insisted that Cipriani still has an important job to play this weekend, "Danny has a role to play this week, just not a starting one," said Johnson. "The guys coming off the bench are important, the days of replacements not being involved are over.

"Danny has a long future in the international game but so has Toby Flood and there are plenty of good players to choose from.

"Danny wanted to play, he was disappointed but understands there are only 15 who can start and seven on the bench."

Cipriani accepted the decision of boss Johnson and he said, "I can understand where Martin Johnson is coming from. If I was coach, I would probably have done the same thing."

"Against South Africa I probably felt a bit overloaded and it didn’t go to plan but I know there is more from me to give at international level.

"It has been a massive learning curve the last three games and hopefully I can move on."