Back to basics for England

Former Lions skipper Martin Johnson has reminded his England team of the importance of getting the basics right when it comes to winning Test-match rugby. [more] 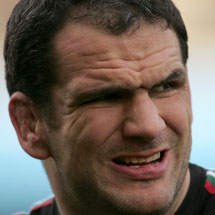 Former Lions skipper Martin Johnson has reminded his England team of the importance of getting the basics right when it comes to winning Test-match rugby.

The man who lead the Lions in 1997 and 2001 saw his first autumn series as England team manager end with a third successive defeat to southern hemisphere opposition on Saturday afternoon.

“You try and tell the players that Test-match rugby isn’t won by the flash things or the glamorous things or the sexy things, it’s won by being able to put teams under pressure for 80 minutes,” said Johnson, whose side begin the November internationals with a 39-13 victory over the Pacific Islanders.

“You do that by doing the all simple things and what people call the basics well. The basics are the game.”

England conceded 15 penalties against the All Blacks, were on the wrong end of four yellow cards and conceded points by turning over possession in a manner that upset Johnson.

“The sin-bins didn’t help, to have four guys in the one game is pretty unusual.

"There were times where we thought we had their guys under pressure but we didn’t make anything of it. Maybe our guys have got to learn that Test rugby is about pressure. When you make mistakes they’ll kill you.

“When we tried to force that little extra pass or tried to do something that wasn’t quite there, or when an error had been made we tried to fix it and ended up compounding it, that’s when we went backwards and we conceded tries. We had a scrummage on our line, turned it over and they scored. That will kill you at any level of rugby, never mind Test-match level.”