World champions South Africa will have to get past the upwardly mobile Welsh and the flying Fijians in Pool D when the next Rugy World Cup kicks-off in 2011. [more] 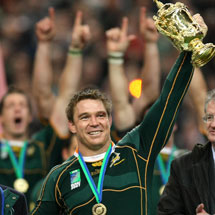 World champions South Africa will have to get past the upwardly mobile Welsh and the flying Fijians in Pool D when the next Rugy World Cup kicks-off in 2011.

The draw for the Rugby World Cup 2001 in New Zealand has been completed at a ceremony in London.

The 12 pre-qualified teams from RWC 2007 were placed into three bands, which for the first time will be based on the IRB World Rankings as of 30 November, with each band drawn randomly into one of the four pools.

The final two positions in each pool will be allocated to the eight qualifying places still available for Rugby World Cup 2011. Pool D will be completed by a side from Africa, and Oceania.

Spingbok captain John Smit welcomed the draw, he said:  "Last time we were drawn against the top team from Britain – which was then England – and this time we have been drawn against Wales who are the Six Nations champions.

“We also played two teams from the Pacific Islands and this time we have Fiji and an Oceania qualifier, which is very likely to be Samoa. The draw has a similar feel to last time and the good thing is that we will be well tested during the competition.

“You don’t want to breeze through your pool and we certainly won’t have that luxury.”

Should South Africa top their pool they will play the runners-up in Pool C, featuring Australia, Ireland and Italy and two qualifiers from Europe and the Americas. If the Springboks finish second they will play the winners of the Pool C.

“It’s a tough draw and it will be a very physical pool but I’m happy with the draw,” said Springbok coach Peter de Villiers. “We’ll be monitoring these nations progress over the coming months but we know what they are capable of when they are on song.

“Wales will only go from strength to strength and we know the Pacific Islands produce outstanding players – e only have to look back to last year’s World Cup to know what a threat they can pose.”

The banding of these eight teams is: