Bok makes move to the right

The future of the Springbok as the rugby-playing emblem of South Africa appears to have been settled, at least for the time being. [more] 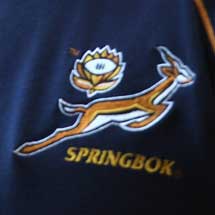 The future of the Springbok as the rugby-playing emblem of South Africa appears to have been settled, at least for the time being.

ritics of the emblem’s presence had pressed for its removal from the national playing shirt altogether but a compromise has been struck that will see the Springbok remain prominent.

The 102-year-old Springbok emblem has often been associated with the country’s apartheid era, leading to numerous discussions as to the appropriateness of its presence in modern-day South Africa.

The emblem will remain on the national shirt but will now move to the right-hand side of the chest from its traditional position on the left.

The King Protea – the national flower that adorns the shirts of all other South African sporting sides – will be introduced to appear in the Springbok’s former position.

“The Council took cognisance of the advice they received from the Sports Minister on pending national legislation and a consensus was reached,” said South African Rugby Union (SARU) president Oregan Hoskins.

"The decision was taken to accommodate the application of the national sports emblem – the King Protea – and to bring SA Rugby in line with other South African sports federations," added an SARU statement.

As a consequence of the change, the Protea that is currently displayed above the leaping Springbok will be removed from the Springbok logo.

The timing of the change will be confirmed once logistical considerations have been finalised but the new format is expected to be in place by the time the Lions arrive in South Africa in May 2009.