Leamy out of action again

Ireland No8 Denis Leamy faces a further spell on the sidelines having seen a specialist after picking up a knee injury during Munster's win over the Scarlets on Friday night. [more] 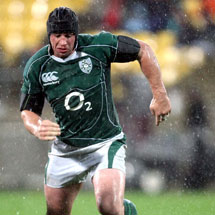 Ireland No8 Denis Leamy faces a further spell on the sidelines having seen a specialist after picking up a knee injury during Munster’s win over the Scarlets on Friday night.

The 27-year-old had only just returned from reconstructive surgery on his shoulder – an injury that had kept him out of action since Ireland’s summer tour of New Zealand.

Leamy suffered his newest setback in the closing stages of the first-ever match at the Parc-y-Scarlets and will now definitely miss his province’s back-to-back Heinekn Cup clashes with ASM Clermont Auvergne.

A tryscorer in the European Cup final triumph over Toulouse in May of this year, Leamy had been tipped to earn selection for the Lions tour of South Africa next summer.

Having missed Ireland’s autumn internationals against Canada, New Zealand and Argentina, the former inside centre now faces a battle to oust the likes of Jamie Heaslip and Stephen Ferris from the Irish national side in the lead up to next year’s Six Nations.

News of Leamy’s injury has prompted Munster to offer back row Justin Melck a contract extension until the end of December. The South African had been due to fly home this weekend but will now stay on at Thomond Park while Leamy attempts to regain his fitness.