A host of Springbok names may have dominated the starting line up during the Barbarians loss to Australia on Wednesday night but it was a Lion who proved the Babaas' most-influential player. [more] 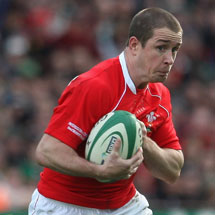 A host of Springbok names may have dominated the starting line up during the Barbarians loss to Australia on Wednesday night but it was a Lion who proved the Babaas’ most-influential player.

A sense of expectation filled Wembley stadium every time 2005 Lion Shane Williams touched the ball during his first outing in a Barbarian shirt, and the 31-year-old didn’t disappoint.

The newly crowned IRB World Player of the Year set up former All Black blindside Jerry Collins for the Babaas’ only try of the night during the 18-11 defeat after coming on as a second-half replacement for Percy Montgomery.

Williams danced around opposite man Digby Ioane on the edge of the Wallaby 22 before slipping a superb overhead pass inside to the onrushing Collins. The Toulon flanker, who turned his back on a contract with the New Zealand Rugby Union to move to France after the last World Cup, read Williams’ intentions perfectly before powering over for a 61st-minute score.

It wasn’t enough to prevent the Wallabies from ending their European tour on a winning note, however, as a late Lachie Turner try dashed Barbarian hopes.

Former Springbok Montgomery, who made his debut against the Lions back in 1997, and possible future international Nick Koster, completed the large South African presence in the famous black and white hoops.

De Villiers and Habana attempted to provide the early spark at England’s national football stadium but De Villiers would no doubt prefer to forget the error that led to the game’s opening try as he found himself on the wrong end of a fierce hand off from Wallaby centre Ryan Cross.

The 29-year-old rugby league convert made light of work of de Villiers’ attempted tackle on the Australian 10-metre line before showing an impressive turn of pace and superb footballing skills to set up Lote Tuqiri for a memorable score.

Having created acres of spaces behind the Babaas defence, Cross sent a perfectly-weighted chip ahead into the path of Tuqiri to give the experienced winger his 31st international try on his first start since recovering from a knee injury that threatened his participation on his country’s European tour.

Full back James O’Connor, who became the second youngest Wallaby when he came on as a replacement in the win over Italy last month, added the conversion before slotting two successful penalties to give Australia a 13-0 lead with 23 minutes played.

Arguably the most-Barbarian-esque moment of the half came from an Australian as hooker Tatafu Polota-Nau cut through the smallest of gaps before keeping his side on the front foot with the deftest of reverse passes.

Federico Pucciariello’s altercation with Australian outside-half Quade Cooper then provoked the loudest crowd reaction of the opening 40 minutes after the Italian prop objected to the nature of Cooper’s challenge on a prone du Preez.

Having hardly threatened during the first 35 minutes, the Babaas finally opened their tally with two straightforward penalties in quick succession. Montgomery’s efforts closed the half-time gap to a single score, with Robbie Deans’ men taking a 13-6 advantage into the break.

After ending the first period on a positive note, the invitational XV began the second half in a similar fashion. An impressive counter attack involving All Black wing Joe Rokocoko and Habana promised much but the Babaas left without any points to show for their early dominance after a stern defensive effort from the Australians kept them at bay.

The most memorable moment of the match arrived when Williams set up Collins for his well-taken try with the game just over an hour old but, despite enjoying a large share of possession and territory, the Babaas were unable to add to their score for the remainder of the match.

Instead it was Australia who finished the stronger of the two sides, with Wasps utility back Turner’s 72nd-minute try ensuring the Wallabies bounced back from Saturday’s narrow defeat to Wales in Cardiff.