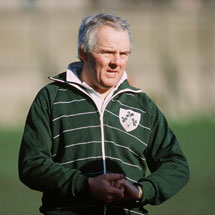 The Irishman has been honoured for his part in the launch and early running of Europe’s premier club rugby tournament during his time as the first chairman of the European Rugby Cup (ERC).

"Tom did an outstanding job in helping launch the tournament at extremely short notice and then defending and championing the principles and objectives of the Heineken Cup," said current ERC Chairman Jean-Pierre Lux.

"The Heineken Cup has made enormous strides since 1995 and the groundwork done by Tom in those early seasons has proved to be the perfect and solid foundation for the continuing growth of the tournament."

Kiernan captained the Lions on their tour to South Africa 40 years ago, playing in all four Tests against the Springboks.

At the time of his retirement he was Ireland’s most-capped player, most-experienced captain and record scorer in international rugby with 158 points.

Now 69, the former full back also coached Munster to their famous victory over New Zealand in 1978, before spending four years as ERC chairman from 1995 to 1999.

"I have to share this honour with the late Vernon Pugh who was responsible for not only instigating the Heineken Cup concept, but also so many other things around the advent of professionalism in rugby in the 1990s,” said Kiernan.

"The Heineken Cup has grown into the wonderful product we always believe it could become and now everyone looks forward to Heineken Cup matches across Europe."