All Black legend Sean Fitzpatrick has become the latest Kiwi to associate himself with English rugby. [more] 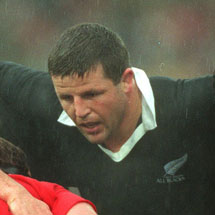 All Black legend Sean Fitzpatrick has become the latest Kiwi to associate himself with English rugby.

Fitzpatrick, who won 92 caps for New Zealand between 1986 and 1997, has joined the Board of Guinness Premiership side Harlequins with immediate effect.

The World Cup winning hooker has been working as a media pundit and motivational speaker since his retirement and will now become a non-executive member of the Board at The Twickenham Stoop.

"We are delighted that someone of Sean’s experience and expertise has decided to join us at such an exciting time in the club’s development,” said Harlequins chief executive Mark Evans. “I am sure he will add value in a number of key areas."

Fitzpatrick led his country to a series victory over the Lions 15 years ago and captained his side over a five-year period from 1992-1997.