Bennett leaving it late for Lions

Wales hooker Huw Bennett's latest injury setback will leave him with little time to press his claims for a place on the 2009 Lions tour to South Africa. [more] 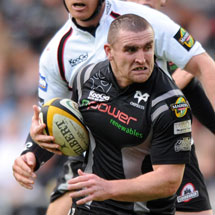 Wales hooker Huw Bennett’s latest injury setback will leave him with little time to press his claims for a place on the 2009 Lions tour to South Africa.

The Ospreys No2 had been first choice for his country under Lions forwards coach Warren Gatland before an ankle injury suffered on November 2 ruled him out until later this month.

The date for Bennett’s comeback has now been pushed back until mid-January at the earliest, meaning the former England Schoolboys international will only have a couple of games to prove his fitness ahead of the Six Nations.

"It’s been four weeks so far, it’s just a question of looking after it really, it’s a ligament injury so the less I do on it the better," said Bennett.

"It’s not like a bone injury when they can tell you exactly when you’re back, it’s just resting it and taking it week-to-week.

"Now it’s just the focus of getting fit and getting back for the Ospreys and hopefully earning selection for the Six Nations."

Bennett has already missed all four of Wales’ autumn internationals, during which time Matthew Rees of the Scarlets started against each of the three southern hemisphere giants, with Bennett’s Ospreys team-mate Richard Hibbard named as a replacement.