Former England international and British & Irish Lion Jason Robinson was on hand at the Welsh Institute of Sport in the Welsh capital this week to help the Welsh Rugby Union (WRU) launch the HSBC Rugby Festivals. [more] 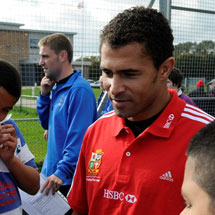 Former England international and British & Irish Lion Jason Robinson was on hand at the Welsh Institute of Sport in the Welsh capital this week to help the Welsh Rugby Union (WRU) launch the HSBC Rugby Festivals.

HSBC is the principal partner of the Lions tour to South Africa next summer and is investing in the world’s largest schools rugby programme which is being undertaken by all four Home Unions.

Robinson, who toured twice with the Lions in 2001 and 2005, was joined by current Welsh star Huw Bennett to pass on tips and coaching advice to over 150 youngsters from schools across Wales.  In total, pupils from 20 Welsh schools will benefit from the experience.

Speaking at the launch Robinson said: “Today is a great illustration of just how much enthusiasm there is for rugby in Wales. To spend time with the children and see how much enjoyment they get from playing the game is fantastic. The children are from emerging rugby schools across the region, meaning that they are just beginning their rugby experiences, and hopefully they will enjoy being part of the HSBC Rugby Festival.”

The boys and girls at the HSBC Rugby Festival were aged between eight and 14 and were treated to personal tips from Robinson who joined the WRU coaches to take the youngsters through various drills and skills exercises.

“The HSBC Rugby Festivals aim to encourage children who don’t necessarily have many opportunities to play rugby to get involved with the sport that we all love,” added Robinson,  who is an HSBC ambassador for the 2009 Lions Tour.

“I have been impressed by the talent on display here in Wales and hope that all the youngsters continue to enjoy playing rugby.”

Over the coming six months, the HSBC Rugby Festivals will involve more than 60,000 children, as well as over 3,000 teachers and coaches. The one-day festivals are being staged in England, Ireland, Scotland and Wales – the first time a Lions sponsor has undertaken such a comprehensive grass-roots programme. The initiative will culminate in South Africa during the Lions tour next summer with more coaching festivals in Cape Town, Johannesburg, Durban and Port Elizabeth.

In another first for a Lions sponsor, 40 of the schools participating in the HSBC Rugby Festivals will be twinned with schools in South Africa as part of a kit donation and cultural exchange programme. Working with the International Rugby Board’s SOS Kit Aid scheme, HSBC will be linking the schools in the UK and Ireland with schools across South Africa. The first of these schools was announced recently by Jason Robinson who was joined by South African Rugby World Cup winner Bryan Habana to twin Pimlico Academy in South London with Hillcrest Primary School in Port Elizabeth.

“HSBC is the world’s local bank and aims to bring together people from different cultures,” explained Giles Morgan, group head of sponsorship at HSBC Holdings plc.

“Working at the grass-roots level of the game is one of the most important elements of HSBC’s sponsorship of the British & Irish Lions, and we are extremely proud to be bringing together children from across the UK and Ireland with children in South Africa.  We hope that the children on both sides of the scheme will benefit from learning more about each other’s culture and experiences and that a shared passion for rugby will act as the perfect bond.”

WRU Group Chief Executive Roger Lewis said, “The Welsh Rugby Union sees the development of the community game as a priority and we are delighted to be able to assist with this initiative.

“One of our main goals is to increase participation levels in the game and projects like the HSBC Rugby Festivals give young people fantastic experiences which will no doubt inspire them to strive to achieve their potential in sport and in life.”