Lions coaches back on track

Lions coaches Ian McGeechan and Shaun Edwards saw their London Wasps side get their season back on track thanks to a 25-16 win in Edinburgh on Friday night. [more] 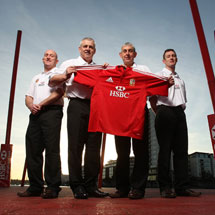 Lions coaches Ian McGeechan and Shaun Edwards saw their London Wasps side get their season back on track thanks to a 25-16 win in Edinburgh on Friday night.

The double Heineken Cup winners put their league form behind them as they moved to within two points of Pool 2 leaders Leinster after registering their second win of the group stages.

England fly-half Danny Cipriani grabbed the headlines for McGeechan’s men as he kicked six penalties and a conversion for a personal tally of 20 points.

The 21-year-old had been much criticised during his country’s run of autumn internationals and had been dropped for the defeat to New Zealand last week but he responded in the perfect fashion to keep Wasps’ European hopes alive ahead of next Sunday’s return fixture at Adams Park.

Cipriani’s international team-mate Tom Rees claimed a late try to seal victory for the visitors after Edinburgh had threatened to make it three defeats in a row in all competitions for the visitors.

Having trailed 12-3 at the half-time interval, Edinburgh turned things around after the break to lead 16-15 as the game entered the closing stages.

Chris Paterson kicked Andy Robinson’s side back into contention before Mark Robertson’s second Heineken Cup try in three games gave Patterson an opportunity to hand Edinburgh the lead for the first time in the match. Scotland’s leading points scorer didn’t disappoint as he raised the hopes of the Murrayfield faithful with a fourth well-taken kick.

Wasps hit back through a sixth Cipriani penalty and Rees’ converted try, however, to register their first win on teh road in this year’s competition.

With the two sides level on four points apiece prior to tonight’s encounter, Edinburgh knew that a  second Murrayfield victory over Wasps in three years would have taken them above the 2005 and 2007 Heineken Cup winners in the pool and would have given them real hope of making the quarter-final stages for only the second time in their history.

Instead, it was Wasps who go into next weekend’s clash with the more realistic chance of reaching the last eight.