Shane Williams has enjoyed unprecedented success in 2008 but the Wales and Ospreys winger knows that being part of a winning Lions side next summer could make 2009 even more special. [more] 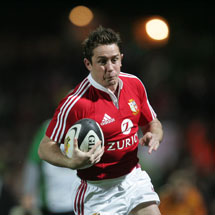 Shane Williams has enjoyed unprecedented success in 2008 but the Wales and Ospreys winger knows that being part of a winning Lions side next summer could make 2009 even more special.

The 31-year-old has been in stunning form so far this calendar year, helping Wales to a second Grand Slam in three seasons, guiding the Ospreys to an EDF Energy Cup triumph and becoming his country’s top try scorer ahead of 2005 stand-in Lions skipper Gareth Thomas.

Williams has also been crowned IRB World Player of the Year and BBC Wales Sports Personality of the Year but the former scrum-half is still desperate to carry on his success in Lions colours when Ian McGeechan’s men face the Springboks in six months time.

“The Lions tour is in the summer and I’d be lying if I said I wasn’t thinking about it,” said Williams, who toured with the Lions to New Zealand three years ago, playing in the second Test against the All Blacks in Wellington after scoring five tries in a single match against Manawatu in the build up to that international.

“It certainly would be my last tour if I was to go and I’d want to be part of a successful Lions tour.”

Williams believes the Lions can return home the republic with their first series victory in 11 years and the former Swansea City football trialist would dearly love to add a successful Lions tour to his increasingly long list of achievements.

“With the calibre of players that could be going on this tour, they are capable of winning out in South Africa. I’d love to be a part of that, but it’s all about form and staying injury free and being fit for the next six or seven months. That’s what I’ll be concentrating on.

“In the meantime, there’s a lot of rugby to be played and anything could happen in this game… but I would love to go on this next tour.”