A late intervention from a 2005 Lions tourist ensured it was honours even between the Scarlets and Ulster in the first-ever Heineken Cup match at Parc-y-Scarlets on Friday night. [more] 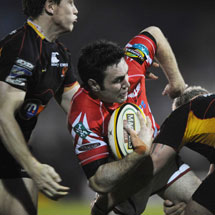 A late intervention from a 2005 Lions tourist ensured it was honours even between the Scarlets and Ulster in the first-ever Heineken Cup match at Parc-y-Scarlets on Friday night.

A 78th-minute penalty from Stephen Jones saved the Scarlets from their fourth European defeat of the season but did little to enhance either side’s chances of progressing to the knockout stages of the continent’s leading club competition.

Ulster looked set to build on their 26-16 victory over the same opposition at Ravenhil last weekend as they opened up a 13-3 half-time lead thanks to tries from Ian Humphreys and Paddy Wallace and a Humphreys drop goal.

The Scarlets hit back immediately after the interval, however, as they levelled the scores with just under half an hour remaining courtesy of a Darren Daniel try and five points from the boot of Jones.

Driving wind and constant rain dictated the style of the match throughout the 80 minutes but a first penalty of the match from Humphreys with nine minutes left to play appeared to have given the 1999 champions a hard-fought victory.

Jones save the Scarlets blushes, though with a late strike that sees both teams’ hopes of qualification lie in the hands of fellow Pool 4 opponents Harlequins and Stade Francais.

The visitors opened the scoring in the 12th minute thanks to a well-struck drop goal from fly-half Humphreys. The former Leicester Tiger sent his effort straight between the uprights from close to 40 metres out after the Scarlets had gifted Ulster an attacking opportunity.

Having created a hint of an overlap following a strong run from No8 David Lyons, the Scarlets spilled ball on the halfway line and then allowed Ulster’s Darren Cave to hack downfield. Scarlets wing Darren Daniel looked to have the situation under control but his charged down clearance saw Ulster gain possession and eventually set the platform for Humphreys to move them 3-0 in front.

The Scarlets were level just five minutes later, however, as Jones kicked his first points of the night via a straightforward penalty from inside the Ulster 22.

The scores stayed level until the 24th minute when Humphreys notched the game’s opening try in spectacular fashion. The 26-year-old Ireland A international switched play from left to right at a scrum just outside the opposition 22 before gliding between two defenders and beating two more for pace on his way to the line. Humphreys was unable to add the extras from just three metres in from the right touchline but his individual effort brought a low-scoring half to life.

Ulster stretched their advantage to 10 points eight minutes later in somewhat controversial fashion. Referee Romain Poite came close to a Scarlets defender as he attempted to claim Paddy Wallace’s hanging up-and-under, but the French official waved play on as Ulster hacked through towards the Scarlets try line. The home side initially averted the danger but then gave away possession as Stephen Jones failed to find touch.

Cave seemed unsure of whether to launch a long pass infield from the 22-metre line or to attack the blindside, but he wisely chose the latter, bursting through a mistimed tackle to create a two-on-one wide on the right. The Ireland Sevens regular, who was one of seven Ulster players to sign a new contract this week, completed his good work by supplying the scoring pass to the grateful Wallace. Humphreys was off-target with his conversion from a similar position to his first attempt but Ulster were worthy of their 10-point lead.

The Scarlets could have narrowed the gap with the final play of the half but scrum-half Martin Roberts decided to take a quick tap penalty rather than give his half-back partner a second shot at goal from inside the Ulster 22. The move would have been inspired if Nigel Davies’ side had forced their way over for a five or seven-point score but it soon appeared to be the wrong choice as the Scarlets knocked on in contact to bring the half to a disappointing end.

Having ending the first period on the front foot, the Scarlets began the second half in similar fashion, but this time they earned some reward for their early efforts. A powerful run from inside centre Jonathan Davies saw the 20-year-old brought down just a metre from the Ulster line and the Scarlets capitalised as Darren Daniel claimed his side’s second try at their new home. Daniel judged the bounce of a long, looping pass better than any of the Ulster defenders before racing 15 metres towards the right-hand corner of the try line.

Jones slotted the difficult conversion to bring the Scarlets back to within a single score with 47 minutes played and the home support didn’t have long to wait for their team’s next set of points.

It came in the shape of a second penalty from the Wales and Lions outside-half as the Scarlets suddenly found themselves on level terms having been two scores behind at the interval.

Humphreys missed the target with two successive penalties in the 58th and 68th minutes before pushing his side back in front as the game entered the closing stages.

All that was left was for Jones to make it 16-16 with just two minutes remaining and deny the Irish province what would have been a memorable victory for the travelling support.