Double Lions tourist Ronan O'Gara made history on Saturday afternoon as he became the first player to break the 1,000-point barrier in Heineken Cup rugby. [more] 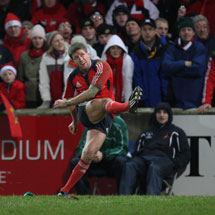 Double Lions tourist Ronan O’Gara made history on Saturday afternoon as he became the first player to break the 1,000-point barrier in Heineken Cup rugby.

The 2001 and 2005 Lion was marooned a point short of the landmark until almost the final play of the win over Clermont Auvergne when he converted Niall Ronan’s 80th-minute score.

Despite successfully kicking two first-half penalties at Thomond Park, the Ireland international was off-target with a further four kicks at goal as he seemed set to miss out on the record this time around.

However, back row Ronan’s fine individual try gave O’Gara one last chance to celebrate the achievement on home soil and the 31-year-old didn’t disappoint.

O’Gara sent his difficult effort straight through the uprights from just five metres in from the left touchline as he capped a dramatic late win for the reigning Heineken Cup champions.

O’Gara’s new tally of 1,002 points has come from eight tries, 134 conversions, 218 penalties and 13 drop goals in 79 appearances, giving him an average of close to 13 points a game in a Heineken Cup career that has so far brought two tournament winners medals.

Despite playing for more than hour with 14 men after second row Jamie Cudmore was red-carded for punching, Clermont led 13-11 as the game entered the dying stages. Potential Lions captain O’Connell was heavily involved in the incident that led to Cudmore’s sending off but the Ireland lock showed his leadership capabilities as he and his colleagues eventually secured a 23-13 win in front of 25,000 supporters.