Ellis to be cited

Leicester and England scrum-half Harry Ellis could face a suspension after being cited for an alleged dangerous tackle on Perpignan star Dan Carter. [more] 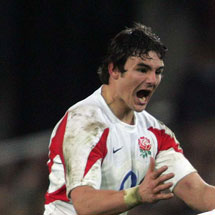 Leicester and England scrum-half Harry Ellis could face a suspension after being cited for an alleged dangerous tackle on Perpignan star Dan Carter.

Ellis, who is currently second choice for his country behind Danny Care of Harelequins, came on as a second-half replacement in the Heineken Cup encounter in France having missed the previous week’s match at Welford Road through injury.

Ellis appeared to lift Carter from the ground during the latter stages of Leicester’s 26-20 defeat in which Carter made his European debut following his move from New Zealand.

An independent disciplinary committee will be appointed as soon as practicable, with Ellis unsure of exactly when he will learn his fate.

The 26-year-old No9, who is among the contenders for perhaps the most competitive position in next year’s Lions squad, has been cited under Law 10.4 (e), which states; ‘Dangerous tackle: A player must not tackle an opponent early, late or dangerously’.