The aptly named Ken Scotland was a player who gave his all for his country and the Lions. [more] 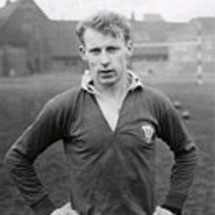 The aptly named Ken Scotland was a player who gave his all for his country and the Lions.

The Scottish full back toured with the Lions in 1959, playing all bar one of the six Tests against the Wallabies and All Blacks.

His form in a Lions shirt was so impressive that he was named as one of five Players of the Year in New Zealand where he was described as ‘a potential match winner with his speed, elusiveness and eagerness to attack’.

Scotland featured in 22 of the 33 fixtures in Australasia and Canada, just one less than Tony O’Reily whose 23 appearances were the most on tour.

The 23-year-old Scotland was renowned for his prowess with the boot but he also made a name for himself as one of the pioneers of attacking full-back play. His ability to counter attack from deep and to pick the perfect moment to join the line were key aspects of the adventurous style that earned the Lions huge plaudits from the New Zealand public.

Scotland’s deceptive pace allowed him to glide through the smallest of gaps, while his distribution skills created plenty of tries for his fellow tourists. The Cambridge University and Heriot’s FP player claimed 12 tries of his own on tour, including a memorable hat-trick against Hawkes Bay in his first game in New Zealand.

Scotland’s versatility saw him appear in a total of four positions for the Lions, with stints at scrum-half and fly-half being outshone by his appearances at centre which culminated a in a Test start in the victorious fourth international against the All Blacks.

While he received plenty of praise for his attacking abilities, Scotland was also extremely reliable in defence and an impressive kicker with both feet. He was one of the first masters of the now commonly-used torpedo kick – a skill he learnt through hours of practice as a youngster on the Goldenacre grounds near Heriot’s School.

When it came to goal kicking, the consistent Scotland used both the traditional toe end method of kicking and the then new round-the-corner style, depending on the distance required.

On what makes the Lions so special

"Principally, the fun we had and the friends that we made for the rest of our lives. That was the big thing about touring, everybody became a personal friend. To meet some of those guys almost 50 years later might seem strange to outsiders but for us it is like we have never been away."

On the role of the kicker

"We had a different philosophy about place kicking in those days. Basically, whoever was nearest the ball or whoever shouted loudest would have taken the kicks at goal. And the fact is, if we had kicked our goals we would have won that 1st Test. (The Lions outscored the All Blacks by four tries to nil in Dunedin but fell to an 18-17 defeat after Don Clarke kicked six penalties for New Zealand.) We should have taken a specialist kicker."

"I remember the sense of real depression at losing that first Test. But then there was the euphoria of winning the fourth Test. Those memories still linger. They were great days and they gave us absolutely marvellous memories."

Scotland made his international debut in 1956 and entered Cambridge University the following year. However, despite having played for his country, Scotland wasn’t selected for the 1957 Varsity side after he suffered a loss of form. Fortunately for the Lions, by the time the tour to South Africa came around 17 months later, Scotland was back to his best.

His retirement in 1965 came shortly before the introduction of the law restricting kicking to touch from outside the 22. The law would more than likely have further enhanced Scotland’s credentials as even more emphasis would have been placed on his counter-attacking prowess.