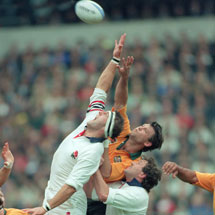 Former Lions lock Wade Dooley has made an unexpected return to first-class rugby.

Dooley, who toured with the Lions in 1989 and 1993, will take up a new role with the Rugby Football Union as one of 11 citing officers.

The ex-Preston Grasshopper had previously been working as a police officer and is already spotting similarities between his job with the force and his new role back in rugby.

"I suppose it’s an extension of what I have been doing for the past 30 years – in effect it’s policing rugby," said Dooley, who retired from police work last year.

"As a player I never minded the rough and tumble of the game but it needs to be a clean contest. Now with all the camera angles, players are going to be spotted if they commit any foul play; there is no hiding place."

Dooley won 55 caps for England over an eight-year spell between 1985 and 1993 and was Martin Johnson’s predecessor in the second row.

The 51-year-old claimed back-to-back Grand Slams with his country in 1991 and 1992 but returned home from the 1993 Lions tour prematurely to attend his father’s funeral.

Dooley has been joined on the RFU’s disciplinary panel by former international Mike Rafter and ex-England Students manager Tony Lanaway.