Tom Rees' Lions chances are in the balance after it was revealed he will be sidelined for the next eight weeks. [more] 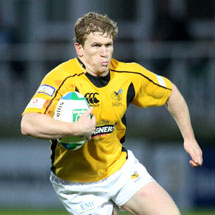 Tom Rees’ Lions chances are in the balance after it was revealed he will be sidelined for the next eight weeks.

The London Wasps and England flanker has torn a medial ligament in his knee, and admitted, “it’s a sickener.”

Rees suffered the injury against Harlequins on Sunday and could now face up to two months on the sidelines, meaning he will miss the majority of the forthcoming Six Nations championship and leave him with a race against time to make the British and Irish Lions squad.

Rees, who impressed during the autumn internationals, told the Daily Telegraph: "I’ve been here before with this type of injury so I know the score.

"It’s the same thing all over again. My knee got forced inwards and I felt a little pop. "It is gutting given that we’ve got a big few weeks coming up," he said.