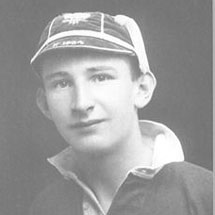 The great Swansea and Cardiff scrum half made his international debut as an 18-year-old in the epic Welsh win over New Zealand in 1935 and played 25 times for his country over a 15 year period.

Having made such a big impact on the touring All Blacks in 1935 – he partnered his teenage cousin Willie Davies at half-back in Swansea’s victory over the tourists before helping Wales to victory – Tanner was picked to tour South Africa with the 1938 Lions.

Still only 21, he was one of the youngest players on the tour.

It wasn’t to prove the happiest of trips for him, with injuries curtailing his chances, but he won eight of the 10 games in which he played and featured in the second Test.

Now living in London, Tanner is still referred to as one of the greatest scrum halves to play the game. Although according to the 1950 Lion, Bleddyn Williams, who played with him on both sides of World War 11, he was ‘the greatest’.

“Among all the scrum halves I’ve seen and played with, he would reign supreme. And the rest of the rugby playing world had the same opinion as myself,” said Williams.

“He was a totally great player – one of the greatest. He was a schoolboy international from Swansea who grew into a master tactician.

“He had a superb pass – the best I ever played with. His service was even better than Gareth Edwards and he could reverse pass almost half the width of the field.

“He would only made a couple of breaks in a game, but they invariably led to tries. He was strong and difficult to tackle.

“I always found him to be a good captain, although he never suffered fools gladly.”

Now there’s a tribute that puts him into perspective!