All Black legend Justin Marshall has signed for Guinness Premiership outfit Saracens for the remainder of the current season. [more] 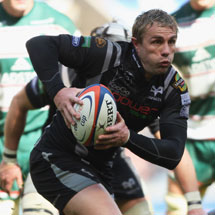 All Black legend Justin Marshall has signed for Guinness Premiership outfit Saracens for the remainder of the current season.

Marshall, who has been capped 88 times by New Zealand and lies second in the list of all-time appearance makers for his country, joins Sarries from French side Montpellier as cover for the injured Neil de Kock.

"Saracens is a high profile, quality club, and I’m looking forward to joining up with the squad,” said Marshall, who will leave France halfway through his one-year contract.

“There’s still a good chunk of the season remaining, and I’m excited about contributing on and off the field.”

South African de Kock has been ruled out for two to three months after breaking his arm in last week’s victory over Bristol and Marshall will now join Fiji skipper Moses Rauluni and Mickey Wilson in competing for the No9 shirt at Vicarage Road.

“In light of the current changes at the club and the Saracens approach, the timing fits just right. This decision works well for Montpellier, Saracens and for myself,” added Marshall, who helped the All Blacks inflict a 3-0 series defeat on the Lions back in 2005.

The 35-year-old former Canterbury Crusader is no stranger to UK rugby having enjoyed spells with Leeds Tykes and the Ospreys, and Saracens’ director of rugby Eddie Jones is delighted to add the highly-respected Kiwi to his squad.

"Justin is one of the most experienced scrum halves in the world and a really tough competitor," explained Jones.

"He will provide great support for Moses and Mickey and we’re lucky to be able to sign someone with his knowledge of the game.

“We’ve got an exciting few months ahead of us as we challenge for trophies in the European Challenge Cup and Guinness Premiership and we’re looking forward to Justin playing his part in that."