Lions contender Andy Powell has quashed rumours surrounding his future by committing himself to his current employers Cardiff Blues. [more] 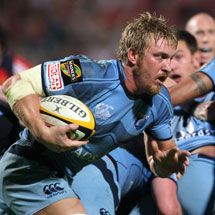 Lions contender Andy Powell has quashed rumours surrounding his future by committing himself to his current employers Cardiff Blues.

The Wales No8 has been in superb form this season for both region and country and has now signed a new deal that will keep him in the Welsh capital until 2012.

Powell, who made his international debut against South Africa at the beginning of November, has impressed with his ball-carrying abilities and work ethic and is now being talked about as a possible Test starter when the Lions face the Boks this summer.

"Andy has been in outstanding form for us this season,” said Blues coach Dai Young.
“He is a quality player with a real presence on the rugby pitch."

There was more good news for Young and the Blues after it was confirmed that second row Bradley Davies had joined Powell in signing until 2012, while scrum-half Richie Rees and prop Gary Powell will remain in Cardiff until 2011.

Doubt still remains over the futures of Wales internationals Jamie and Nicky Robinson, with the brothers yet to sign new deals despite their contracts coming to an end this summer.
"It’s up in the air at the moment," centre Jamie told BBC Wales’ Scrum V Radio programme.

"It’s a huge decision for me. My heart is with the Blues but we are still in the early stages of talks."