Smit to take on dual role

South Africa's World Cup winning captain John Smit will alternate between hooker and tight-head prop for the Sharks in the Super 14. [more] 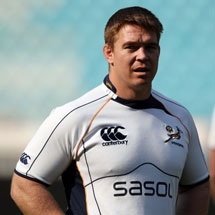 South Africa’s World Cup winning captain John Smit will alternate between hooker and tight-head prop for the Sharks in the Super 14.

Smit played for the Sharks as a replacement prop against the 1997 British & Irish Lions before going on to become one of his country’s greatest hookers and captains of all-time.

After leading the Springboks to victory over England in the 2007 Rugby World Cup final in Paris he then quit South African rugby to play for ASM Clermont-Auvergne.

But he quickly had a change of heart and after only one season he reverted back to the Springbok camp and is set to return to the Sharks’ Super 14 side next month.

Springboks coach Peter de Villiers switched Smit to tight head prop on the Autumn tour to the UK – Smit played at prop for South Africa Under 21 – and the Boks scrum didn’t suffer at all. The tourists won all three Tests, beating England by a record margin at Twickenham.

Now Sharks coach John Plumtree has confirmed that Smit will share the hooking duties with his Springbok rival, Bismarck du Plessis, in the Super 14 and will also get time in the No 3 jersey.

“John will play at hooker and prop in the Super 14. In the front row, you’ll never be able to rely on one player to play in the same position every week,” Plumtree explained to the Daily news in Durban.

“So, John and Bismarck will both get some time at hooker. John is also happy to play at tighthead and this will obviously help him to develop in this position."