Three-times Lions tourist Will Greenwood has backed Brian O'Driscoll to lead the tourists in South Africa this summer. [more] 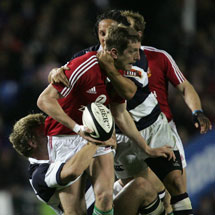 Three-times Lions tourist Will Greenwood has backed Brian O’Driscoll to lead the tourists in South Africa this summer.

Greenwood, who featured in all three of the most-recent Lions tours, believes O’Driscoll should follow Martin Johnson in leading the Lions on two occasions, although he admits he would have no qualms should Paul O’Connell be given the nod instead.

"Personally, I would take O’Driscoll, but there would be no arguments if he picked (Paul) O’Connell," Greenwood told PA Sport.

"O’Driscoll captained Ireland exceptionally well to the Grand Slam. He has scored tries in key games when the team wasn’t performing that well, and he even dropped a goal against England."

Greenwood toured alongside O’Driscoll on both the 2001 and 2005 Lions tours when the Irishman experienced contrasting fortunes.

Eight years ago in Australia, O’Driscoll was arguably the star of the tour, scoring a stunning solo try in the first-Test win over the Wallabies and announcing himself on the world stage in some style.

Four years later and O’Driscoll had hoped to avenge the 2001 series defeat by leading the Lions to glory in New Zealand for only the second time in their history. The All Blacks had other ideas, however, as a double tackle ended O’Driscoll’s tour inside the first few minutes of the opening Test. The Kiwis went on to win the series 3-0 and O’Driscoll left for home a frustrated man.

"While there is no room for sentimentality on a Lions tour, to go as captain to New Zealand in 2005 and be up-ended one and a half minutes into the first Test match and stretchered off, you sort of get the feeling that if a guy is owed one then maybe it is him," said Greenwood.

"They won’t pick him for those reasons, it will be pure rugby reasons and what gives them the best chance of winning."