Steve Bates says Jonny Wilkinson could have played club rugby this weekend, had Newcastle been in a Guinness Premiership relegation battle or looking for a top-four finish. [more] 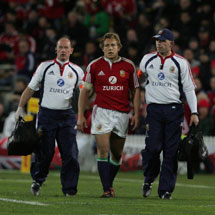 Steve Bates says Jonny Wilkinson could have played club rugby this weekend, had Newcastle been in a Guinness Premiership relegation battle or looking for a top-four finish.

The 2001 and 2005 Lions star has not been named in the Newcastle squad for Sunday’s European Challenge Cup quarter final against Saracens at Vicarage Road, but his director of rugby at the Falcons has admitted that he could have been risked if his presence had been essential.

Wilkinson hasn’t featured for club or country since dislocating his kneecap against Gloucester on September 30.

Although he had been expected to return to action over recent weeks, a reaction to certain elements of training has put his latest comeback on hold and led many critics to rule him out of contention for this summer’s Lions tour.

“There’s no chance of Jonny playing this weekend,” said Bates.

“He hasn’t trained all week again because certain things are happening with his rehab that are now being very much focused on different areas of that knee.

“That means he can’t come and take a full part in training, but if it was a case of us being in the play-offs, say, and we needed him to come and play, he is reasonably close.

“But as it’s not absolutely essential, the best thing to do is look after him.”