Delon Armitage admits he is still pinching himself at the prospect of a British & Irish Lions call up. [more] 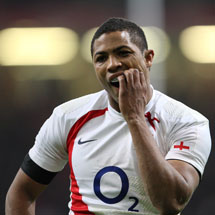 Delon Armitage admits he is still pinching himself at the prospect of a British & Irish Lions call up.

Lions head coach Ian McGeechan will name a 35 or 36-man squad this coming Tuesday and the London Irish and England full back is among those being touted for a place on the plane to South Africa.

Armitage only made his England debut against the Pacific Islanders in November of last year but his current form has seen him become a real contender for a back three place in McGeechan’s party.

“I’m still pinching myself. People are telling me I’m going to be involved with the Lions, but I’ve only just started playing for England,” Armitage told Sam Peters of The Mirror.

“I’d be lying to say that I haven’t thought about the Lions – and prayed and hoped and kept everything crossed. It’s been keeping me awake quite a bit. I’m just hoping for the best.”

After a disappointing 2007/08 season, Armitage won an England call up for the autumn internationals after injury ruled out a number of key rivals.

Since then, the 25-year-old has refused to take a backward step, playing in nine successive internationals and ranking consistently among his country’s top performers.

He now admits that a Lions call that looked so unlikely just six months ago would be the ultimate way to finish an incredible season.

“After getting through the autumn and Six Nations playing in every game, to get a chance for the Lions would be massive for my career,” added Armitage.

“It will be the pinnacle. You can’t get any higher in rugby than a Lions call-up.

“I’ve come a long way in a short space of time. Since my debut for England I have played every game. It’s been massive for me.

“Confidence-wise, I am just flying with my rugby and I’m really enjoying it. Fingers crossed, I get the Lions nod.

“Just for me to be considered at this stage of my career is massive. Whatever happens, I will be happy with the way I have grown as a player this season.”