One of the stars of the 1997 Lions tour of South Africa has given a 2009 Lion a confidence boost just a month out from departure for the Republic. [more] 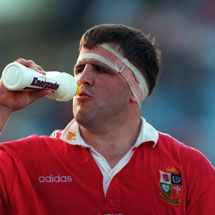 One of the stars of the 1997 Lions tour of South Africa has given a 2009 Lion a confidence boost just a month out from departure for the Republic.

Tom Smith was at the heart of a stunning series victory 12 years ago and he hopes a current club-mate can play a similar role this time around.

Smith has spent the past two seasons playing with fellow Scottish prop Euan Murray at Northampton Saints and the 37-year-old has been impressed with what he has seen in that time.

"Euan’s had a good season and he has definitely pushed on from last season," said Smith, who also toured Australia with Graham Henry’s Lions in 2001.

"When you come to a big club it takes a little while to settle down, but he’s really doing well."

Smith, who retires from the professional game at the end of the this season knows exactly what it takes to earn Test colours with the Lions having played in six successive internationals in ’97 and 2001.

Having watched Murray develop first-hand since the 28-year-old’s move from Glasgow in 2007, Smith feels his prodigy has what it takes to match his impressive achievements with the Lions.

"After the November games for Scotland I think he gained a lot of confidence and he’s definitely in there as a probable Lions starter," added Smith.

"A lot of things can happen on a Lions tour but if you can keep yourself fit and well and in contention come the first Test, then you’re in.

"Part of it is luck and part of it is playing well, but I think Euan will be pushing all the other guys for a starting spot."